St. Louis Circuit Attorney Kim Gardner is accused of tampering with evidence to secure a felony charge for Patricia McCloskey, reports the local NBC affiliate, KSDK. The firearms held by Mark and Patricia McCloskey (Mark McCloskey will join me tomorrow on my radio program) seen in the June 28th video were not only unloaded and the couple had no ammunition in the house, but Patricia McCloskey’s pistol was knowingly inoperable.

McCloskey’s pistol was inoperable due to the incorrect order in which the firing pin and spring were assembled so as to bring it into the courtroom as a prop for a previous case. Assistant Circuit Attorney Chris Hinckley ordered the crime lab to field strip McCloskey’s pistol (the couple turned it over through their attorney on July 11th) after which they discovered the improper assembly. Documents obtained by KSDK’s “5 On Your Side” show the lab stating “The firearm was reassembled properly, test fired and functioned as designed.” 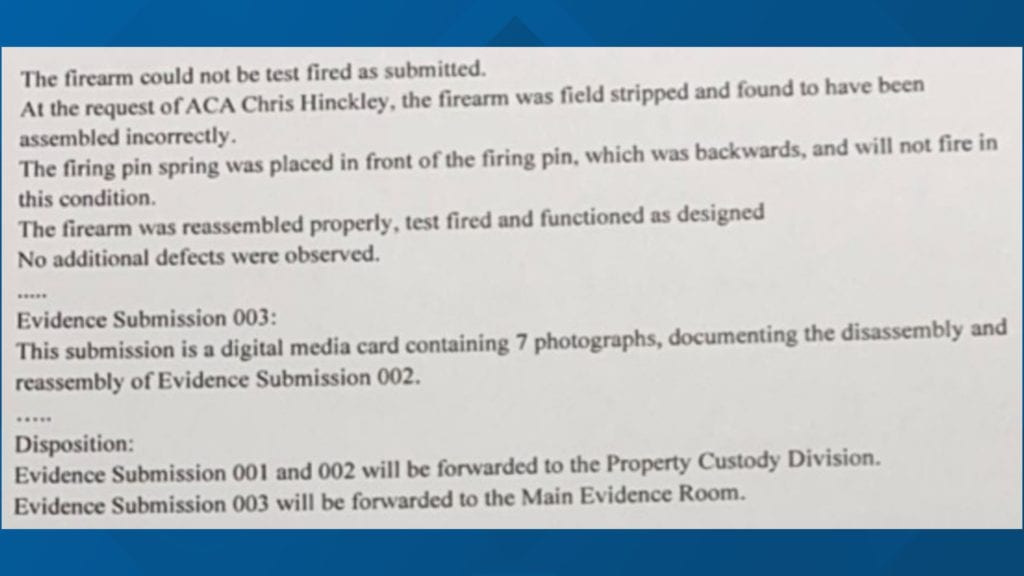 The inoperability of McCloskey’s firearm wasn’t mentioned in the July 20th sworn affidavit signed by STLPD Detective Curtis Burgdorf (nine days after the couple turned in the pistol) nor the fact that both firearms were unloaded with no ammunition in the house, nor that the mob had broken a private gate to trespass on private property, nor were the numerous reported threats from the mob mentioned. The pistol was presented as an operable firearm, a “readily accessible” lethal weapon, which it was clearly not, so as to secure the Class E felony charge against Patricia McCloskey.

I realize that the affidavit isn’t evidence per se and the courtroom is where this is fought — but it’s shocking that politically motivated prosecutors can take an inoperable gun, make it operable, and on that basis throw a felony charge against a citizen — while depriving them of their private property sans due process. What of Burgdorf’s accountability? What, if any, are the consequences for filing a false probable cause affidavit or at the very least omitting exculpatory evidence? Keep in mind that the national unrest began with criticism of policing, do Democrats really want to be seen as pushing for, and accepting of, false information and omissions in a probable cause affidavit? (Non-lawyerly question here: is this actionable under 42 U.S. Code § 1983?)

I asked Missouri’s Attorney General Eric Schmitt (around the 3:50 mark) about the unloaded aspect of the firearms and whether or not that fact would undo or reduce the charges against the couple as the state statue reads [bold my emphasis]:

A person commits the crime of unlawful use of weapons if he or she knowingly:

(1) Carries concealed upon or about his or her person a knife, a firearm, a blackjack or any other weapon readily capable of lethal use

Schmitt says that the state’s castle doctrine makes the firearms’ conditions irrelevant (this was before we learned of the evidence tampering. I’ve reached out to Schmitt’s office for comment on the crime lab rendering an inoperable firearm operable and Gardner’s office using this as the basis for felony prosecution).

Do Democrats really want to cement their reputation as the party that will tamper with evidence in order to strike out at the Second Amendment? The McCloskeys were on their own private property in lawful possession. The only criminal activity so far in this case is the tampering of evidence and omission of evidence in a sworn affidavit.

MO AG Schmitt: McCloskeys Had a Right to Defend Themselves

Mark McCloskey is Being Used as a Political Prop by St. Louis’s Circuit Atty

This is What the Second Amendment is for