I've been in politics long enough to know that politicians get George Thorogood-landlady lovey dovey when there is a race they need to win. They appear out of the ether at grassroots rallies, they're suddenly on the airwaves talking about issues that predate their advocacy but not their immeasurable concern. They'll leverage anything they have to add a dimension to their personality.

In the modern era of politics there is B.T. and A.T., or, before tea party and after tea party. B.T. was a difficult time for pols as most were too afraid to legitimize the concerns of millions of Americans. The sort of limited government they espoused threatened to erode the influence special interests cosmetically extended to them. Some pols were quiet. Some were downright hostile towards grassroots. Some offered support in exchange for using the grassroot momentum to boost their own chances. Some said to hell with grassroots and co-opted entire groups in attempts to capture elected office. I've witnessed every scenario, even the rare occurrence of someone who has the fortitude of character and shares the interests of the electorate. I'm witnessing it in my homestate of Missouri, where I was born and raised, and lived until just a year ago, where I return to as often as I can to see family that, somewhat facetiously, populate most of the Ozarks.

Peter Kinder is Missouri's Lieutenant Governor and the best conservative hope for the governor's office. 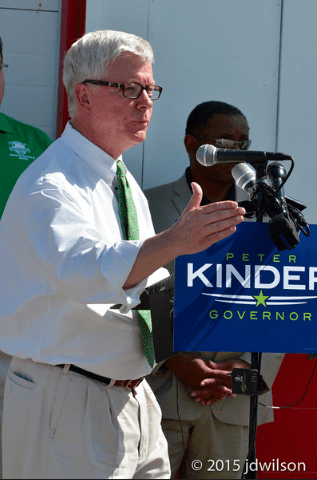 Of all the candidates, only one has a proven conservative record and a documented track record of having grassroots's back every single time. Kinder is the only candidate in the Missouri governor's race that has been the most constant, vocal supporter of the tea party movement (I say this as a founder of the movement in St. Louis), yet never once has he ever demanded favors or campaign support in return as some Missouri pols have done. He was the first to file suit against Obamacare. He is the only candidate in the race that rang the alarm over DOR and DHS's secret attempt to push Missourians into a backdoor firearm registry. He was made aware of the case by Stoddard County Prosecuting Attorney Russ Oliver and Kinder promptly pushed the MO GOP into action, noted Oliver on my radio program. Kinder helped publicize the case of the DOR saving biometric data against state law. Kinder is the only gubernatorial candidate that took Eric Holder's DOJ to task for playing St. Louis by refusing to release the findings of their investigation last year. He fielded calls from helpless mayors who went ignored by Missouri's Governor as their cities burned in the Ferguson riots. Kinder challenged the Missouri Governor for holding back the National Guard. He is also the only one on record who personally responded and visited Ferguson in an attempt to stand in for the absence of the Missouri Governor and various elected congressional officials. Kinder blasted the establishment in his own party when they began wobbling on Prop E. Kinder is staunchly against Common Core, is solidly pro-2A, is pro-life, and advocates for the tenets that motivate limited-government supporters.

I don't need to criticize the other names in the gubernatorial race as Kinder's record speaks for itself. In my entire political life, I have endorsed but maybe five or six candidates. I am not a fan of politicians. The last eight years has made me nearly hate the entire lot of them with a tiny few exceptions. I am not a fan of party mentality or going along to get along. I'm not a fan of panderers. I am a fan of people who keep their word and politicians who don't use their influence to co-opt. I'm a fan of knowing where candidates come from beyond vague campaign platitudes and hazy political associations from a decade ago. I'm a fan of people who can keep it real in southern and western Missouri just as much as they can in a municipality north of St. Louis.

This is why I'm proud to endorse Peter Kinder in the Missouri Republican primary.