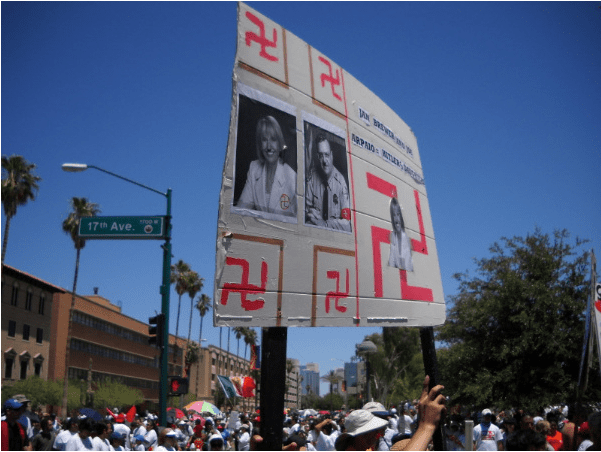 The analogy is beyond stupid. Jews were targeted BECAUSE of their ethnicity, not exempted because of it. #historyfail

Can I point out the irony of the left using Nazi signage as a way to claim persecution yet they continue to side with groups like Hamas whose statements against Israel sound like something lifted from Hitler’s diary?

American Power has a great post of the zany leftist groups, pro-trespass, and others who comprised the rally against the law in Arizona, including photos of the NUMEROUS naturalization, immigration, passport, and offices of other such services located all throughout Phoenix.

I’ve said it before: It amazes me the cosmetic quality of immigration concern from some on the left. It’s easier to encourage trespassers to break the law and riot in the street and hold protests denouncing leaders as Nazis than it is to actually pitch in and help these individuals become legal citizens. Conservatives are all for immigration. FTW! Bring more people over, add to the economic base, contribute to society! But just as immigrants from every other country are expected to abide by the rules when seeking citizenship, so must those coming from Mexico.

Some on the left don’t seem to care that encouraging trespassers to engage in illegal activity might hurt their chances at obtaining citizenship. They don’t care; they’re happy to use these ethnic individuals as tools for the leftist cause. I’ve featured on my show religious groups (in St. Louis even) who assist prospective Americans with becoming citizens. Where are the secular groups who do this? What happened to all the people on the left who would gladly gum for the camera and carry signs but scrammed after the protest, why did these individuals not stay and give of their money and time to help these prospectives become naturalized citizens? The Phoenix Suns, with all their millions, why have they not donated any of their money or time to help these individuals become citizens beyond a cosmetic jersey-change which gave them more press than usual?