By now you’ve read the story on the shooting of Jacob Blake, the young father shot by police officers who responded to what was described as a “domestic disturbance.” It was reported that Blake was breaking up an argument between two women and then everything escalated to the point of police trying to tase Blake, to them telling him to stop as he walked to his SUV to retrieve something before cops opened fire. Blake is in the hospital and underwent surgery earlier today. I pray he recovers and his kids don’t lose their father. Meanwhile, the family has hired civil rights attorney Ben Crump.

I’m including the video here because I think it’s important to provide all information especially during a time of unrest across the nation. Please note —  this video is graphic:

They shot another Black Man 7 times in the back.
Kenosha #Wisconsin. He is in critical condition.

This will not end until we end it! When will it be enough? #BlackLivesMatter pic.twitter.com/pVgCwbJoKh

To understand this conclusion of action we need to understand what started it. Why did police engage Blake in the first place? USA Today reports that Blake had an open warrant for his arrest from a domestic case in May, so were police serving this warrant? Police haven’t yet said, we don’t even know if they were aware of the warrant when they arrived on the scene. The Heavy linked to the case details and also noted this [bold my emphasis]:

A 2015 story in Racine Eye described how “Racine police say K9 Dozer had to help officers take a man into custody when the man refused to go quietly into custody after he pulled a gun at a local bar.” The man was described as Jacob Blake, 24, of Racine, which makes him the same age as the man shot by police on August 23. The Racine Eye story said he was charged with “one felony count of resisting arrest causing a soft tissue injury to a police officer and one misdemeanor count each of carrying a concealed weapon, carrying a firearm while intoxicated, endangering safety-use of a dangerous weapon, and disorderly conduct.” Those charges don’t show up on the circuit court website though.

That story further alleged, “Blake and two women were at the Brass Monkey tavern, 1436 Junction Avenue, Saturday when Blake got into an argument with another patron and pulled a black handgun. Blake pointed the gun at the other man, and the magazine fell to the floor. The bartender told Blake to leave, and he did but then pointed the gun through the window at patrons inside the bar before walking south on Junction Avenue.”

Police stopped Blake in a “high risk traffic stop” but he “exited the SUV and started walking toward officers and ignored commands to get down on the ground,” the story said. That’s when officers forced him to the ground and used a K9 when he kept resisting, the story added.

Again, we have no idea if police were aware of this when they arrived on scene where two women were reportedly fighting and Blake was intervening. I bolded part of the last graph because if correct, it would show that Kenosha isn’t the first time Blake didn’t listen to cops’s directions. Going off the video, the police responded as per their training. What caused them to use a taser on Blake? If Blake got into an altercation with the cops, why didn’t a taser subdue him? Why would Blake start a physical altercation with police knowing his kids were in the car watching? We don’t have the answer to these questions and until we do the logical response is not to substitute accusations of racism in the place of those answers. If the truth shows that these officers were driving around looking for black men to execute, then that’s altogether another story and I’ll join you in raising hell. However, again, going from the video, Blake walked away from officers while they were telling him to stop, went to his SUV, opened his SUV’s door, and reached for something inside. How did the cops know he wasn’t reaching for a weapon? How would you know? 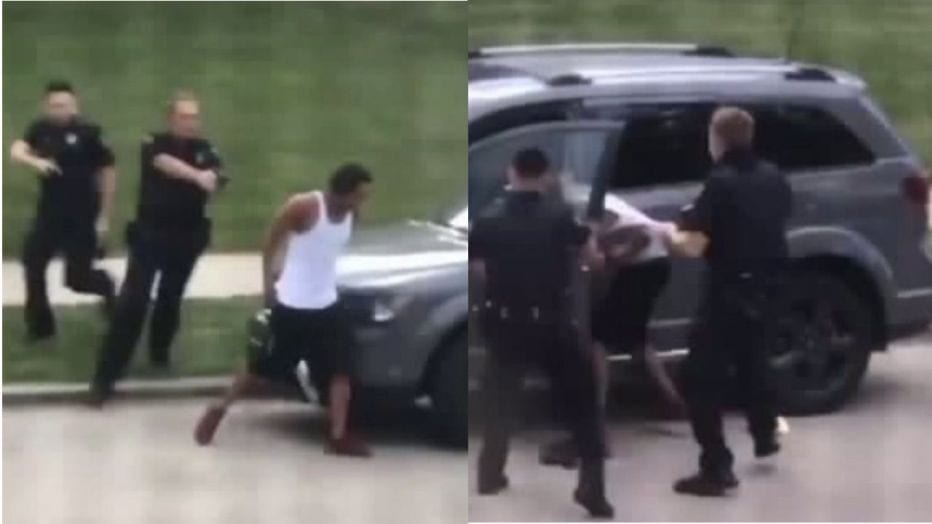 Here’s the thing, when cops tell you to stop, don’t move, and especially don’t retrieve stuff from your car, it’s for a reason: they don’t know whether you’re reaching for a weapon or not. Think this exact scenario hasn’t happened before? It has:

People retrieving things from cars (or reaching into pockets, etc., etc.) is a risk to police — black and white officers — so much so that one such tragedy was turned into a training video. If you disagree with police tactics the time to make your stance isn’t during engagement and to say so isn’t out of respect for any sort of big government, but rather to keep you from exactly the sort of outcome witnessed in the videos above. If you dislike police tactics and think your police department is run poorly, once again take it up with the city leadership, who in this case is Democrat Mayor John Antaramian, the city’s longest-serving executive. Antaramian was first elected mayor in 1992 and left office in 2008 to start a consulting business before returning to office in 2016. That’s longer than my entire adult life he’s been in this position and he hasn’t pushed to solve problems like this?

While the county has long been blue, Kenosha voted for a Republican president for the first time in 44 years this last election. I remarked upon this commonality between cities with these issues in this long thread, of which two tweets are below:

Looking at the city of Chicago, I’m beginning to see a trend. I agree with you — ditch bad policies and bad city employees, including bad cops. But who writes the policies? Which party controlling these cities has looked the other way for so many years? pic.twitter.com/oQqkrQ7rmD

Democrats were quick to exploit the problem they created to incite fury and dodge accountability:

While we do not have all of the details yet, what we know for certain is that he is not the first Black man or person to have been shot or injured or mercilessly killed at the hands of individuals in law enforcement in our state or our country.

Jacob Blake should not be fighting for his life right now.

As @JoeBiden said, there must be an immediate investigation and the officers involved should be held accountable.

Jacob, our nation is praying for you and your entire family. https://t.co/F4CSs6JnjS

Up close look at the car dealership fire set by BLM arsonists in Wisconsin pic.twitter.com/Mv1CC7htiD

This used car dealership was set on fire overnight by protestors. Car Source is just down the street from the Kenosha courthouse. The owners are devastated. Their business a total loss. @cbschicago pic.twitter.com/emYtWNzvh9

A few people are dancing on top of the now destroyed cars pic.twitter.com/MPLViEbS3h

This is happening tonight:

A rioter poured gasoline on a Kenosha garbage truck and set it on fire. pic.twitter.com/sjf7A6np03

Anytime deadly force is used, our hearts go out to those affected by it. We assure you an independent investigation is being conducted by the Wisconsin Department of Justice, Division of Criminal Investigation.

Until that investigation is completed, we ask that you withhold prejudgment about the incident and please the let process take place. Governor Evers’ statement on the incident was wholly irresponsible and not reflective of the hardworking members of the law enforcement community, not to mention the citizens of the City of Kenosha.

As always, the video currently circulating does not capture all the intricacies of a highly dynamic incident. We ask that you withhold from passing judgement until all the facts are known and released.

We, along with the citizens of the great City of Kenosha, ask for peace and to let the process play out fairly and impartially.

Demand answers, but also demand truth. Demand accountability not just for police, but also for those whom you elect — the people who write the laws that the police enforce — and for those who engage the police.

**According to reports, a woman called the police because Blake was trespassing at her home and had taken her keys.