“I think what I saw this morning was a Bull Connor speech in 2020. And unfortunately, it was being given by a Black prosecutor.”

Connor was a white Democrat who, in his authority as Birmingham’s Commissioner of Public Safety, brutalized black Americans engaged in peaceful protest. Garza suggests that Cameron’s remarks regarding the Breonna Taylor case were somehow in someway indicative of Connor’s brutality (I’ve written about the Taylor case here).

What’s most interesting is how Garza is the co-founder of a group that openly admits its Marxist practice:

There are two explanations here: Either those affirming Marxism as their political ideology are ignorant of Marx’s actual words and positions, having read no further beyond his Communist Manifesto, or they approve of his racist words and positions, which is even worse — a lot worse for Garza whose only complaint against Cameron is that he’s a Republican. That’s nothing compared to Garza’s idol, Karl Marx.

Instead of tearing down these icons of murderous bigotry, the left celebrates them, adopts them, makes them into iconography for the “resistance” of liberty. “If George Washington, Thomas Jefferson, and Theodore Roosevelt must fall,” asks Jarett Stepman, “why not the fathers of communism, Karl Marx and Friedrich Engels?” Engels, Marx’s collaborator, writes to Marx’s daughter (who, with her husband, later committed suicide): 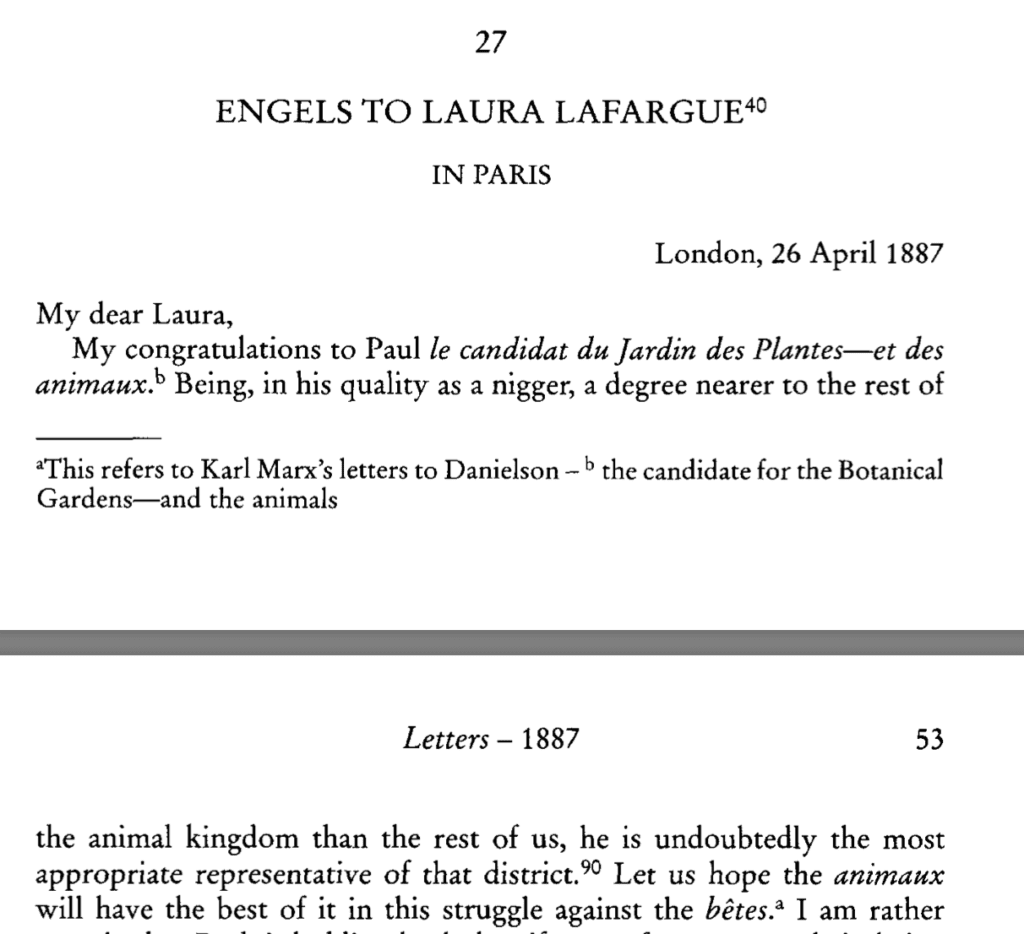 For those who see Marx as their hero, there are a few historical tidbits they might find interesting. Nathaniel Weyl, himself a former communist, dug them up for his 1979 book, “Karl Marx: Racist.” For example, Marx didn’t think much of Mexicans. When the United States annexed California after the Mexican War, Marx sarcastically asked, “Is it a misfortune that magnificent California was seized from the lazy Mexicans who did not know what to do with it?” Engels shared Marx’s contempt for Mexicans, explaining: “In America we have witnessed the conquest of Mexico and have rejoiced at it. It is to the interest of its own development that Mexico will be placed under the tutelage of the United States.”

Marx had a racial vision that might be interesting to his modern-day black supporters. In a letter to Engels, in reference to his socialist political competitor Ferdinand Lassalle, Marx wrote: “It is now completely clear to me that he, as is proved by his cranial formation and his hair, descends from the Negroes who had joined Moses’ exodus from Egypt, assuming that his mother or grandmother on the paternal side had not interbred with a nigger. Now this union of Judaism and Germanism with a basic Negro substance must produce a peculiar product. The obtrusiveness of the fellow is also nigger-like.”

Engels shared Marx’s racial philosophy. In 1887, Paul Lafargue, who was Marx’s son-in-law, was a candidate for a council seat in a Paris district that contained a zoo. Engels claimed that Lafargue had “one-eighth or one-twelfth (black) blood.” In a letter to Lafargue’s wife, Engels wrote, “Being in his quality as a (black), a degree nearer to the rest of the animal kingdom than the rest of us, he is undoubtedly the most appropriate representative of that district.”

Marx was also a rabid anti-Semite, writing in “On the Jewish Question”:

“Let us consider the real worldly Jews, not the Sabbath Jews, as Bauer does, but the every-day Jews.

What is the secular basis of Judaism? Practical needs, egoism.

What is the secular cult of the Jew? Huckstering. What is his secular God? Money.

Very well. Emancipation from huckstering and from money, and therefore from practical, real Judaism would be the self-emancipation of our epoch.

An organization of society, which would abolish the fundamental conditions of huckstering, and therefore the possibility of huckstering, would render the Jew impossible.”

Marx’s bigoted ideology was adopted by murderous tyrants the world over who’ve massacred millions in his name.

How ironic that Black Lives Matter was formed and is run by “trained Marxists.” And Garza has the audacity to complain about Daniel Cameron because he’s a Republican?

Stepman notes what we’re fighting with this:

The words and philosophy of Jefferson and America’s other Founding Fathers made free men out of slaves. The communist ideology of Marx and Engels made slaves out of free men and plunged large parts of the globe into misery, tyranny, and darkness.