Fresh off the heels of “parks are racist,” here is the latest installment of Everything is Racist™: Surfing is racist. Or something. That’s it, that’s the story.

Surfing, despite its roots in indigenous Pacific Islander history, has been seen as a sport for straight white men for far too long. https://t.co/DEqbMmAWv5

Let the eyeball flagellation from reading this begin.

Nonprofits in SF and beyond are trying to bring more BIPOC and women into the sport.

OK, awesome! Do your thing! Go surf! I’ll cheer from the beach because long ago I developed a somewhat healthy fear of the shark’s house.

The story discusses one of its profiled subjects:

She remembers a running bit she had with one of her first surf buddies there. “He was always like, ‘Yeah, just look for me, the blonde dude in the water.’ The joke was like, everyone’s a blonde dude.”

Wait — is this racist? I can’t tell anymore. Disagreeing on healthcare is endemic to racism nowadays.

Growing up, Dionne Ybarra would have had a hard time seeing surfing as anything other than a white sport. From The Beach Boys to Endless Summer to Point Break, popular culture paints a starkly white picture of American beach life — and people who look like her can’t help but internalize that.

“There’s this fear set up from birth that we’re not ocean people, we don’t go in the ocean,” she says, referring to people of color in America.

Ybarra’s mom had her take swimming lessons as a kid, but still made her wear a life jacket anytime they were by the water. Ybarra laughs as she remembers the life jacket, describing how it completely undermined the lessons she took.

A fear set up from birth apparently taught in the home. That isn’t racism. The article also talks about the expensive price tag of coastal homes and how racism, rather than high demand which drives the price. Here’s Oprah’s beachfront home in Malibu. I’m not prevented from buying something similar because of bigotry, but because she’s a jillionaire eleventy-times over. 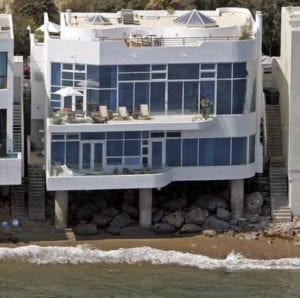 My little beach bunny has been surfing since she was 8. We didn't wait for someone to SJW the ocean…we just went. The ocean is an open invitation for all who seek it out, regardless of color. We really don't need to be making WATER racist. #BlackFolksSurfJustFine https://t.co/zfqwwkMkNK pic.twitter.com/qL9MThtahE