Bang a gong, it’s on: the fight for the soul of the Democrat party is on in earnest tonight — especially if Biden takes Texas. Top four things I’m watching: turnout (enthusiasm), exit data, purple districts and states, how Biden and Sanders performance compare.

– Fox News projects Biden to win Virginia at 6pmCT. Biden just crushed Sanders in this — with over half of the precincts reporting

Bloomberg's loss in Virginia is quite the blow. He spent millions of his own money from his pocket and through his org.'s to flip the commonwealth's legislature blue. And this is what Dems in the state give him in return.#SuperTuesday2020

This is true. Bloomberg spent millions upon millions to only slip further in the polls (the polls in which he had any viability, anyway).

– The state I’m watching is Texas. Sanders’s lead is minuscule against Biden here (1.5%). I wouldn’t be surprised at either Biden or Sanders winning this state. Biden needs the delegates more and with 261 delegates at stake, if Bernie wins a majority he may prove unstoppable. Texas is not a winner-take-all state; delegates are awarded based on who takes 15% or more of the vote in various districts (a primer on how it works here).

– Remember — California is new to Super Tuesday and could dramatically affect the outcome (i.e. make evident who is getting on the ballot first round at the DNC).

– 6:30pmCT … Turnout in NC is expected to surpass 2016 (it did not in Iowa and Nevada.) This may bode well for Biden, who leads Sanders in the state polls. Only three candidates made the 15% threshold to take delegates in this state, Bloomberg is the third after spending millions but he’s barely hanging on. The real competition is between Biden and Sanders.

– Warren is siphoning votes away from Bernie in a few states … was that the plan? Makes sense … I’ll deep dive with this tomorrow on the program.

– 7pmCT Biden wins Alabama — he now has a streak along with VA, AL, NC.

Warren is causing problems for Biden and Sanders in MA. She’s been reduced to a foil from a contender. She is finished in this primary.

Bernie Sanders lost to Hillary Clinton by 29% in Virginia in 2016.

He’s won no where else.

– TEXAS: Less than 1% in and Sanders is leading Biden … Travis County is in this mix, and for non-Texans, that includes Austin, for your perspective.

Legit just created an entire Twitter account to tell the world @BernieSanders isn’t even on the first page of the ballot. You have to look for an icon located at the far bottom of the page then scroll to find his name #BernieBallot pic.twitter.com/kEeTCcDwKg

– As we wait for numbers, check out this gem. Pete tries to cowboy up that accent in Dallas:

Mayor Pete doing a fake Texas accent while speaking to a Texas audience. He don’t feel no ways tired. pic.twitter.com/K4nRqDZq9k

– Rock the Vote is still irrelevant:

– 7:50pmCT Texas is reporting. Biden and Sanders are going to duke it out; Warren is hurting Sanders.

– HAHAHAHAHAHA: Warren indicates that she is not dropping out Tuesday night cbsn.ws/38lrNC0

– TEXAS: Biden is performing well with minority voters if you go by exit poll data. With 23% of the precincts reporting reporting Sanders is currently leading Biden by nearly 7%. Biden is also taking the older voters compared to Sanders’s younger voting block. Sanders’s strength is consolidated in the 18-24 demo (72%) compared to Biden’s relatively split between the 45-64 demo and the 65+ demo (45% and 46% respectively). The youth vote turnout is very low, however.

Fox is calling it early for Sanders. Out of spite I’m hanging back.

– 8:30pmCT Biden currently leading in Minnesota, thanks in no small part to Klobuchar’s support 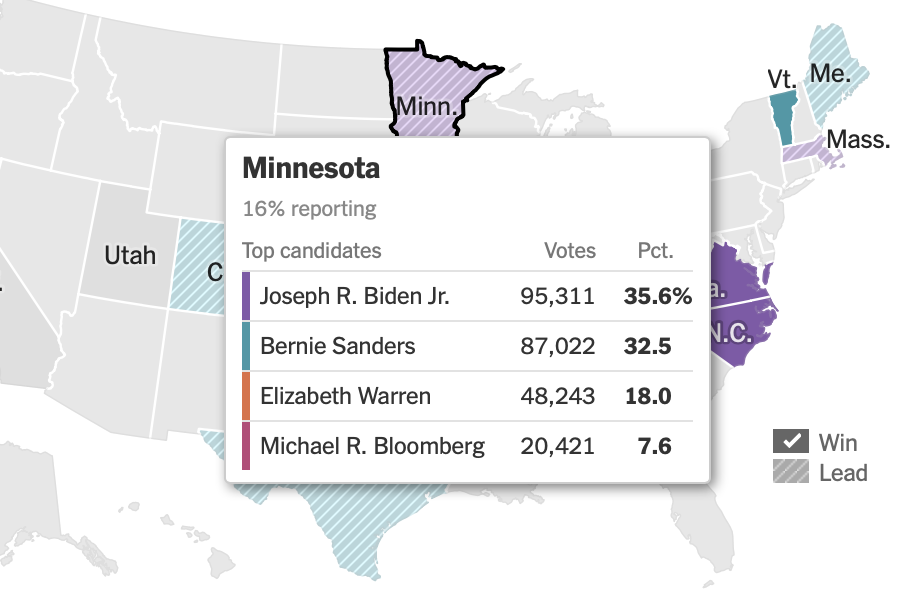 – Bloomberg is Biden’s foil and Warren is Sanders’s foil. This is better than Netflix tonight. 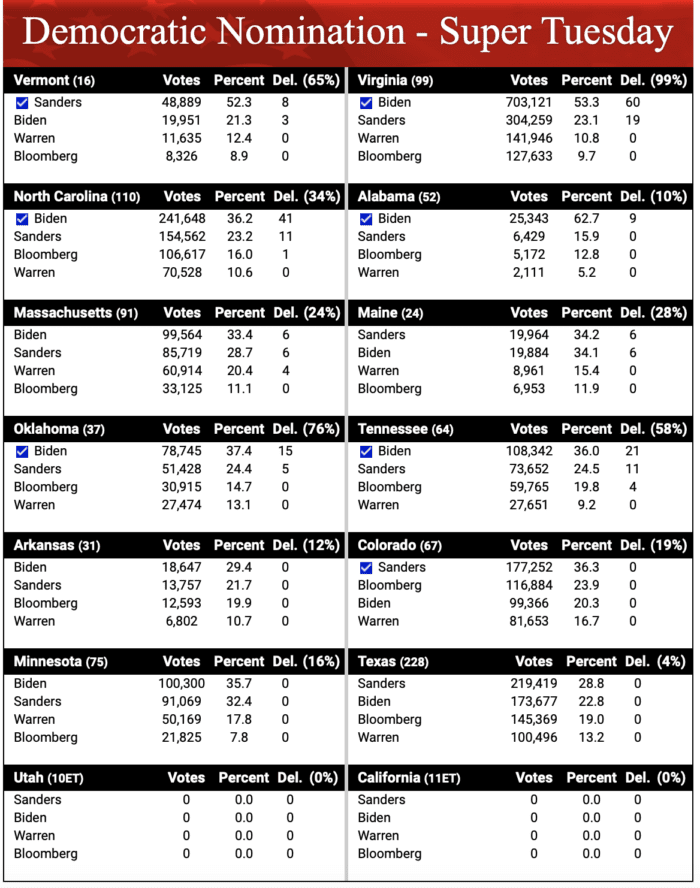 – Biden may have managed to rip away a delegate from Bernie:

It'll be interesting to see if Biden squeezes a delegate out of Vermont, says @ec_schneider

Sanders won it by 86% in 2016, shutting Clinton out from getting any there. If exit polling holds, then Biden might get one.

One potential loser tonight is campaigns. Like, in general.

Joe Biden had ONE field office in Virginia. Was outspent 7-to-1 by Sanders and almost 100-to-1 by Bloomberg in all super Tuesday States. Had barely campaigned in any states. And yet…

Obviously if Biden pulls out the nomination (and he has every chance to catch up to Bernie within the next month) he will have to change this because Trump is a master at retail politics. Biden has struggled before (explains his history of poor performances in primaries and caucuses — tonight is the best night of his political career) and he has to get very good before going up against Trump if Biden makes it through to the general.

– Sanders is struggling with minority voters. NYT notes Biden’s success — this will be a huge thorn for Sanders going forward

– Biden is seeing one of the biggest political comebacks in primary history and this isn’t possible without the influence of James Clyburn. The speculation is Clyburn’s influence extends far beyond SC to NC and VA. More. This is brilliant:

It was an old-fashioned vote-whipping triumph. Jim Curley would have recognized it on sight. Two generations of Daleys would have celebrated it. Adam Clayton Powell would have whistled in admiration. But the analogy fails, because Clyburn did not do this as a boss. He didn’t order up votes. He summoned them. He did it through thousands of personal connections that he’d made all over the state all down through the years. There was power in these politics, but this was not an exercise in power politics. Those connections extend beyond South Carolina, and the power of them runs in a number of directions.

The biggest winner tonight may be James Clyburn. That man’s coattails saved Biden’s political life. Clyburn put in decades of work in retail politics making connections and like nothing I’ve ever seen he called up his contacts to the polls. He stepped in at the 11th hour and pulled Biden through. There aren’t enough chits in politics to repay that kind of Dumbledore magic.

– 9:15PMCT: Bernie speaking in front of a horde of white people (the man is struggling so hard with non-white progressives) and by speaking I mean YELLING LOUDLY and sounding mad.

– Sanders isn’t guaranteed and the fact that these fortunes changed tonight means Democrats could have stopped this looooooong ago.

– Warren loses her home state of Oklahoma and her adopted state of Massachusetts. !!!!!!!!!!!!

– Biden confuses his sister for his wife in his remarks and I don’t even care, this is so entertaining. Actual quote: “By the way this is my wife — oh wait, no.” Hashtag Super Thursday everybody.

Biden calling his wife his sister. Not good. pic.twitter.com/lBYR7huXjb

The biggest loser tonight, by far, is Mini Mike Bloomberg. His “political” consultants took him for a ride. $700 million washed down the drain, and he got nothing for it but the nickname Mini Mike, and the complete destruction of his reputation. Way to go Mike!

– Let’s check in on Mike Bloomberg:

I mean just keeps taking in the wins pic.twitter.com/iphPLU6VoO

– Back to Biden speech:

"We won Minnesota because of Amy Klobuchar," Biden says. 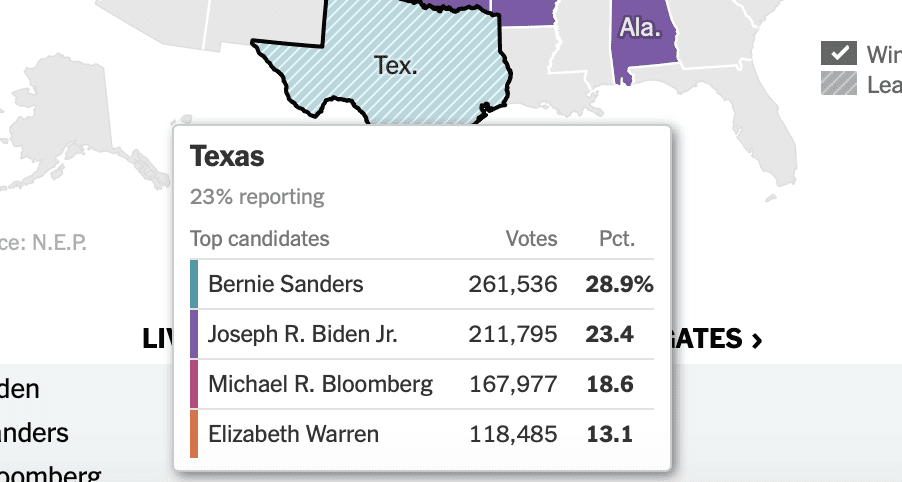 If Biden can make up this difference as the precincts report in, HUGE.

– Don’t get too giddy about the Democrat party possibly rejecting an avowed socialist but actual communist. Here’s why. NBC’s exit data:

If you think this won’t rear it’s head in 2024, you’re mistaken. Will discuss on air tomorrow. 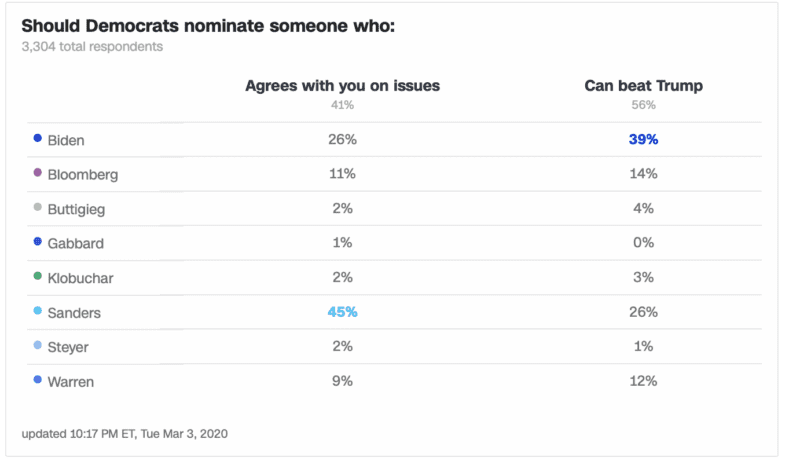 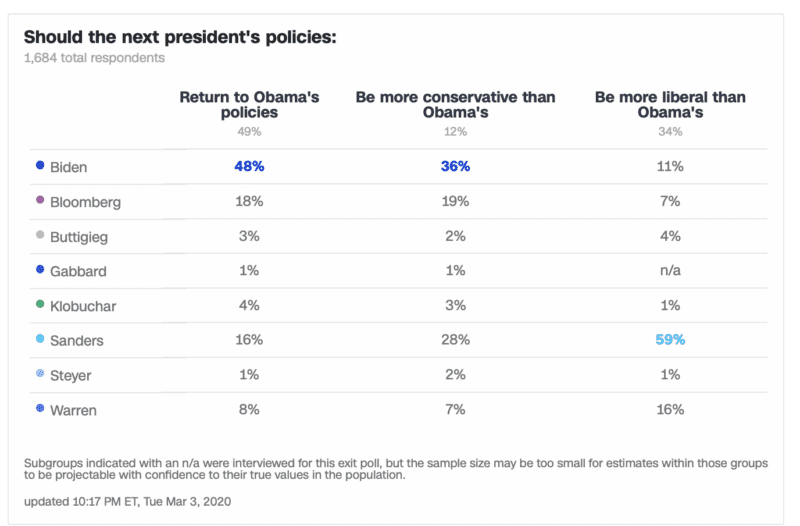 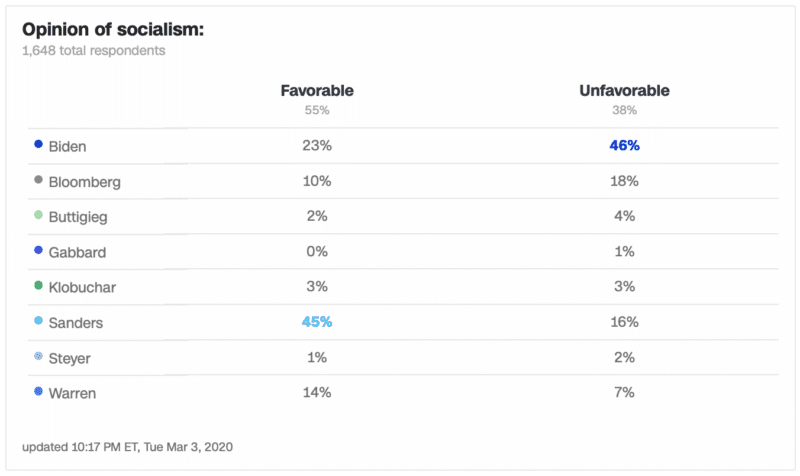 Add local media in those markets and it easily tops $100 million worth of earned media in 72 hours.

– 10:36pmCT Your girl has taken her second dose of strep meds but is watching Texas, which is currently too close to call.

Warren is only winning a small handful of towns in Massachusetts. These include her home, and that of Harvard, Cambridge with 43%, Somerville (Tufts) with 40%, Belmont (as in Belmont vs. Fishtown) with 32%.

In the rest of the state, she's running third with 22%.