Last weekend, an attack that has since been claimed by ISIS was thwarted. A free speech event in Garland, Texas, was the target. Pam Geller, who recently won a controversial lawsuit allowing her to print advertisements that tell the unvarnished truth about Islam, coordinated the event in solidarity with the January terrorist attacks on the French satire publication Charlie Hebdo.

According to my friend Ann (last name withheld due to safety concerns), who attended the event, something seemed off from the very beginning.

Several people went outside to get pictures and video footage of the protesters. But there were none. Instead, it was eerily quiet. So we knew early on that something just felt wrong.

At an event like this, protesters seemed almost inevitable. So the question is this: did the local Muslim population who might otherwise have protested suddenly develop thicker skin or a taste for tolerance? Or perhaps did they have advance knowledge that something might happen that night?

Everyone had to enter and exit through one set of doors. Anyone who was seen deviating from that path was considered a threat. We heard them on the radios early in the evening talking about seeing one man walking around on the grass and checking him out. I don’t know if he had any connection to what happened, but security was on him right away.

The event went on without any hiccups, and when the speakers wrapped up their remarks, a few people began to head toward the door. That’s when the commotion began outside.

The attackers drove up to the exit doors and stepped out of their vehicle, carrying weapons. They opened fire on the police outside the door, and in a brief exchange of gunfire, they were both killed and one police officer took a bullet to the leg.

They were clearly waiting until the event was over. It was live-streaming, so they even could have been watching in real time to see people starting to gather in the hallway near the doors. It’s clear that the police and security were not the targets. We were the targets. They intended to take out every person in the building, and there were nearly 300 of us. The police and security teams did their jobs admirably – we were literally seconds away from a massacre, and they stopped it.

Not surprisingly, the aftermath of the event brought out a myriad of different reactions. There was the shock, of course, that terrorists aligned with the Islamic State would dare to take an action on American soil – and in Texas, no less. There were several liberal journalists who immediately blamed free speech. 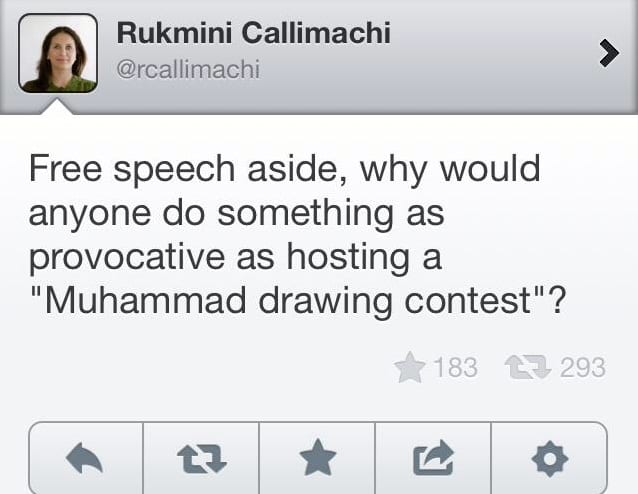 And then the conservatives who would normally defend free speech to the death – some who just a few months ago were adamantly tweeting #jesuisCharlie – jumped into the fray, saying that Geller and company “should have known better.”

That response left a sour taste in my mouth, sounding a bit too much like, “well, you knew your husband was abusive. You probably shouldn’t have done something you knew would piss him off,” for my tastes. Partly because it reeks of “victim-blaming,” but also because it perpetuates that myth that Islam is peaceful and only retaliates when attacked. To that, I have only one response:

Did Geller know that the event was likely to stir up controversy? Sure. But does that mean that she should not have held it? No.

The funny thing about the First Amendment is that it really exists solely to protect offensive speech. Think about it: if people only ever said things that were pleasant and complimentary, why on earth would they need legal protection? Does that mean that we should say things that are offensive on purpose? Well, that depends.

On social media over the past few days, I have seen Geller’s event compared to the free-speech-limiting cliché “yelling ‘FIRE’ in a crowded theater.” I don’t believe that’s entirely accurate. The ‘incitement to riot’ decision was penned by Justice Oliver Wendell Holmes not in an effort to justify restrictions on speech, but to make the point that free speech can occasionally have consequences. Legal liability for those consequences has to be based on the “reasonable man” test.

For example, if you walk into a crowd and yell, “FIRE!” or “BOMB!” the reasonable man would likely panic. If you place a cross in a jar of urine, deface a painting of the Virgin Mary, or draw a cartoon version of the Buddha, a reasonable man might refuse to purchase your publication or organize a boycott. He might refuse to attend your gallery exhibit. There is no expression of art that, in the mind of the reasonable man, is justification of murder.

But events like this do serve a greater purpose: they wake people up to the greater problem we face. They tell us unequivocally that the unreasonable are among us, and that they stand ready to kill us if we have the gall to remind them that we are still free. They remind us that it doesn’t matter if only 1-3% of Muslims are jihadists, because it only takes one man with a gun and a willingness to kill Americans. They remind us that even if over 90% of Muslims are “moderate,” when they are forced to make a choice, they almost invariably fail to condemn those who perpetrate terror.

A friend attempted this week to get his “moderate” Muslim friends to condemn the Texas attack. He called several of them out by name on social media. He received one response, pictured below: 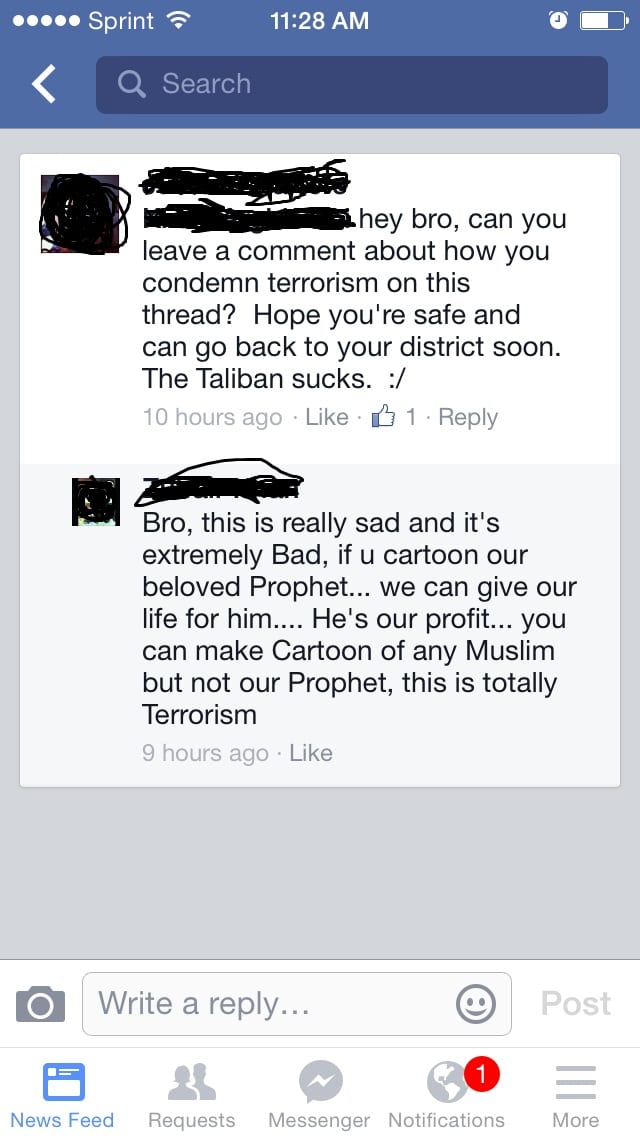 But even more telling is the number of Americans who are willing to censor themselves out of fear. We no longer need activist judges to force Sharia on the United States if we have American citizens who are willing to allow its de facto implementation out of fear that the wrong person might end up with a pair of twisted panties.

What they fail to understand is that it never stops there. If an event that celebrates free speech is offensive now, how long before it is offensive for me, as a woman, to go outside in shorts and a tank top? With my face uncovered? How long before my daughters are told that school is just for boys? As Ann said:

How long before we are quietly walking our own children to the gas chambers? Not me, not my family. I will not willingly take the first step down that road.