A new poll released by WPA Opinion Research on behalf of the Family Research Councill shows that the vast majority of Americans support religious liberty in the workplace. Last week saw Governor Mike Pence (R-IN) signing Indiana's “Religious Freedom Restoration Act,” infuriating liberals zealots whom alleged his legislation encouraged discrimination against gays. It's safe to assume these delusional liberal “activists” neglected to even read the bill before taking an extremist stance against it. Yes, these are very the same left wing activists whom accuse Republicans of intolerance.

Unsurprisingly the Obama administration, fueled by Democratic dissolution, is once again executing their big government agenda, stripping away freedoms—the very same freedoms protected by the Constitution. Last week we witnessed a family restaurant in Indiana, Memories Pizza, threatened and forced into foreclosure after exercising their rights to freedom of religion. Memories Pizza, a family owned restaurant in Indiana, is just one example of several businesses publicly shamed for exercising their American rights. Accusing Memories Pizza employees as homophobic is as outrageous as it is inaccurate. Crystal O’Connor, owner of Memories Pizza attempted to clarify the misunderstanding of his business decisions:

“The news took it totally out of proportion. They lied about it. We said that we would serve anyone that walked in that door, even gays…”But we would not condone a wedding… That’s against our religious beliefs.”

The owners of Memories Pizza are not alone, other companies such as Hobby Lobby and Chick-Fil-A have been targeted by liberal media for discriminating against customers based on their sexual preference.

According to the latest research, these business owners don't stand alone. In a survey of 800 registered voters 81% “agree government should leave people free to follow their own beliefs about marriage as well as live their daily lives at work and the way they run their businesses.” Furthermore, 80% of non-religious Americans strongly support freedom to practice one's beliefs. 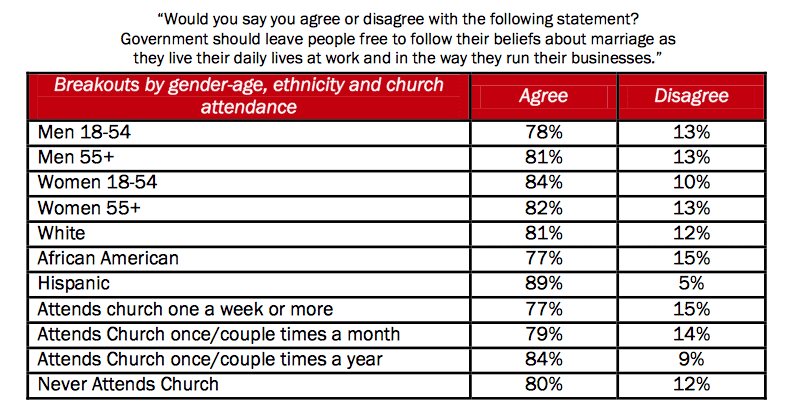 Other findings of the survey: The majority of Americans disagree that the Supreme Court should force all 50 states to redefine marriage. Considering that over 50% of the working population works in a small business—businesses which have generated the bulk of new jobs in the past 15 years—the ability to excercise religious liberty in the workplace is important.

It's clear from the survey data Americans are more interested in keeping government out of their businesses and daily lives, based on the fact that only 19% of registered voters agree with the liberal rhetoric criticizing small businesses such as Memories Pizza.