Earlier today “#CancelNetflix” began trending on social media after outraged people, Republicans and Democrats and everyone in between, objected to a film about young girls and their competitive twerk troupe. Initially they were all attacked by a bunch of dudes outraged that anyone would be outraged over the sexploitation of children. It makes sense that caricatures of seemingly lonely old men would love a story about gyrating, twerking 11 year-olds showcased in a film in which one minor’s breast is reportedly exposed, right? “It’s art!” they vociferously proclaim through their keyboards. “It’s a coming-of-age’ story!” they protested. Sure, and so was “Showgirls,” but at least the characters weren’t pre-pubescent children.

Let’s lay out the facts first:

-> The film was given a “severe” parental warning at IMDB: 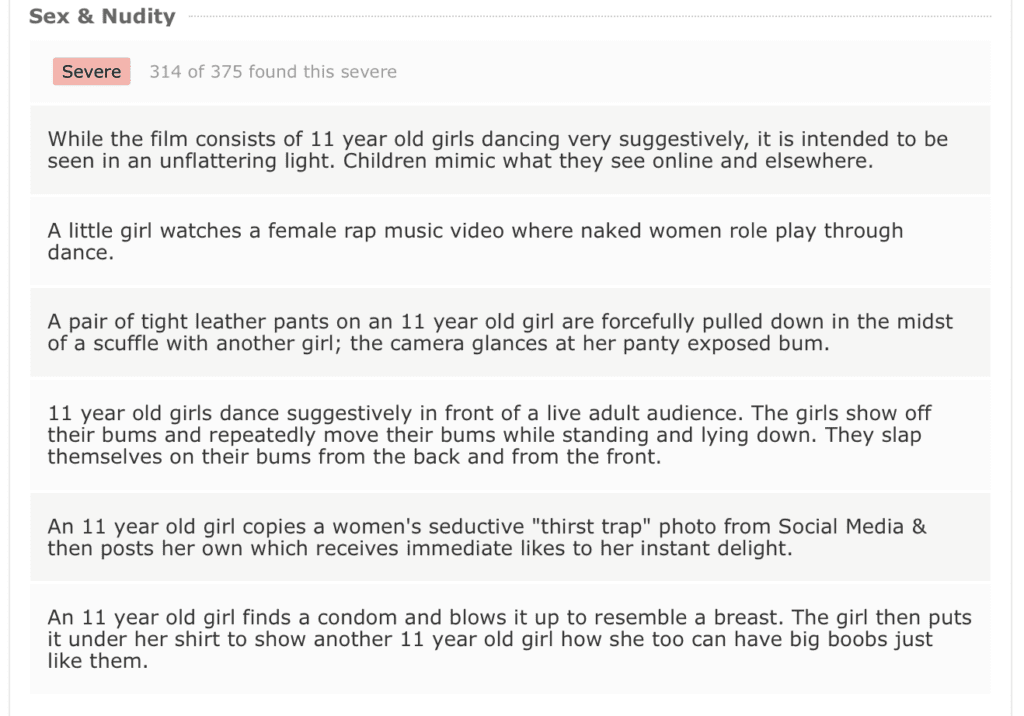 It seems it was sanitized from earlier: 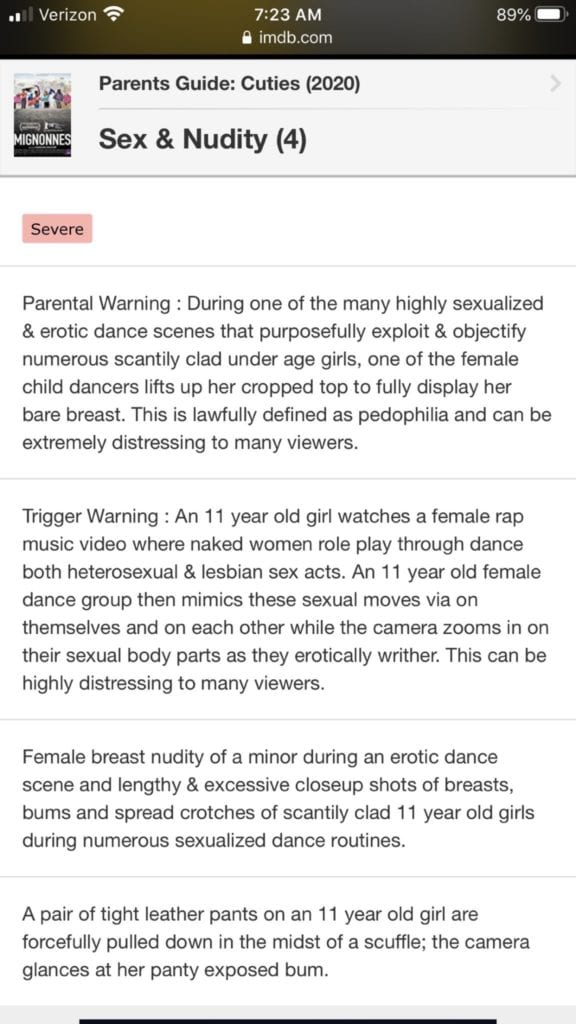 -> All of the purposefully provocative imagery to which everyone is reacting was released to promote the film.

-> Early reviews of the film questioned the tactic of sacrificing subtlety for over-the-top, in-your-face twerking:

“We then move to outrageous musical montages involving close-up crotch shots of pouting pre-teens. Doucoure seems to want to provoke censure, but fails precisely because she’s trying so hard. Ultimately, that’s the fate that also befalls Amy as she learns the perils of the internet and the limits of the selfie.”

Writer/director Maïmouna Doucouré’s script was slighted for its fast pace which required a suspension of consequential reality to make the story elements flow:

“But as Amy gets closer to the dance contest, falling in and out of favor with the other girls, the storytelling becomes less fluid. Even the frequent shots of energy injected via dance montages start to feel like padding as the plot momentum falters. The director is working mostly in a naturalistic vein and her occasional stylistic flourishes of magic realism don’t always feel organic.

The bigger issue is that once the film establishes its critical view of a culture that steers impressionable young girls toward the hypersexualization of their bodies, it sets up a clash against traditional values that should provide a sturdy third act — particularly given the rich contextual potential to explore African identity in a Western European country. The elements are put in place, from Amy’s defiance, dishonesty and ruthless determination to participate in the contest at any price, to Aunty’s glowering condemnation and Mariam’s emotional crossroads as the wedding approaches. But Doucouré doesn’t quite thread those strands into a satisfying conclusion.”

The defense of the sexploitation is that the story is about condemning sexploitation, which is the same logic as screwing for chastity. Even if I believed this defense, are today’s filmmakers so devoid of original ideas to portray the cultural limbo of prepubescent youth that hyper-sexualization is the only way? So many stories have been told of this human rite of passage throughout history; the hyper-speed of technology and the curated and somewhat impersonal way (tech, ironically, by way of promising more contact also created more physical distance) in which today’s kids consume information and interact with each other surely provides countless new angles to explore?

Rolling Stone defends it this way:

“To be fair, Netflix — the company that purchased this slice-of-life drama at Sundance, where Doucouré won the Best Directing award in the fest’s World Cinema Dramatic Competition — did the work exactly zero favors by switching out the original French poster (kids romping down la rue after a shopping spree) for one featuring the underage cast in provocative poses and couture. Out of context, the girls’ outfits look questionably flashy and trashy; seen in context, as the costumes for a hip-hop dance troupe competing for a grand prize, you understand how they function in regards to a bigger-picture message that Doucouré is trying to get across.”

In what reality is crotch shots of a young girl in context, exactly? Or bending over in front of the camera while gyrating? Shock is is a cheap pantomime of art. Some would say Ron Jeremy is shocking but not an artist. I took nearly 17 years of classical ballet. I know dance, movement, and expression and as a kid workshopped with the likes of Savion Glover and more. Tell me where a minor humping the floor would be acceptable in any context:

Netflix is comfortable with this. Plenty of people will defend it. This is where our culture is at. pic.twitter.com/UlqEmXALmd

As a female, I (like many other women) have also lived this hyper-sexed expectation nonsense. I don’t need to be mainsplained about popular culture’s expectations of young women in order to fit in with an ever-increasing oversexed society. When I was around 13 or 14 years-old in an invite-only class our instructor had the idea to set a modern routine to Prince’s “Darling Nikki.” Our instructor was a brilliant dancer and an absurdly out-of-the-box choreographer but the movements, coupled with the lyrics, were wholly inappropriate for our years and our parents were right to be outraged. I didn’t have the wisdom of life experience or emotional maturity at the time to understand fully why it was so wrong (we thought we were pushing the envelope and envelope-pushing surely must be a hallmark of art, so we never objected) but that’s where the adults in my and my classmates’s lives came into play, to protect and guide us.

Others excused the film’s content by saying that Netflix didn’t make the film, it simply mis-marketed it. It’s a specious defense: the film is marketed with visuals from the film and excerpts from the film.

We're deeply sorry for the inappropriate artwork that we used for Mignonnes/Cuties. It was not OK, nor was it representative of this French film which won an award at Sundance. We’ve now updated the pictures and description.

Here is the Netflix description:

“Eleven-year-old Amy starts to rebel against her conservative family’s traditions when she becomes fascinated with a free-spirited dance crew.” [Previously, the description read, “Amy, 11, becomes fascinated with a twerking dance crew. Hoping to join them, she starts to explore her femininity, defying her family’s traditions.”]

Isn’t this setting up a false choice, though? Isn’t limiting the lead female, the main character, to this false choice of sexualization or nothing a perpetuation of the very limitations you protest? Femininity isn’t defined by what makes lechers happy, a betrayal ironically marketed as “liberation” by third wave feminism. In numerous interviews Doucouré says the focus on sexualization was to condemn it:

“For me, this film is sounding an alarm,” the French Senegalese director tells TIME, ahead of the worldwide release of Cuties on Netflix on Sept. 9. “This film tries to show that our children should have the time to be children, and we as adults should protect their innocence and keep them innocent as long as possible.”

Doucouré explains that she is telling this story through Amy’s eyes, challenging the audience by showing the hypersexualization of children has become normalized. Cuties explores how girls become women, sometimes sooner than they should, forced into adulthood by the society they live in and the media they consume. “When I was young, I also saw a lot of injustices around me lived by women,” says Doucouré. “We’re used to saying that women in other cultures are oppressed, but the question that I had when making the film was: Isn’t the objectification of a woman’s body that we often see in Western culture another kind of oppression?”

Yet from all the clips, reviews, stills, etc., it most definitely does not at all read this way, due to, to play devil’s advocate, Doucouré or Netflix. It can’t all be Netflix’s fault here, remember, they didn’t make the movie. Again, it’s the false choice of sexualized “freedom” or nothing. If Doucouré truly wanted to be groundbreaking she would have broken with this sad tradition (Amy competes for a scholarship! Amy wins a spot over a boy in a STEM class! Her conservative Muslim family rages!) — but would the film have generated as much buzz, as much controversy? No one at-large outside of Sundance talked about this film until Netflix unveiled their booty shorts poster for it. “Cuties” is basically a rehash of “Girls Just Wanna Have Fun” if envisioned by Jeffrey Epstein. No one would bat an eye about another dancing chick flick redo — but make it with young girls who twerk and slap their butts? Introduce not just a conservative family but a conservative Muslim family? Suddenly, sweet, sweet controversy. Controversy sells.

Meanwhile, the majority of sex trafficking victims are women and the average age that a girl enters the “trade” is right around the age of the girls in “Cuties.” Why would we cheer a film that underwrites the controversy of its hyper-sexualized storyline involving young girls with humanity’s lecherous underbelly? There are zero reasons.