Virginia’s annual Second Amendment rally came and went and the state’s legislative session is underway. Despite the hype from gun control advocates, Democrats like Ralph Northam, and many in legacy media, the rally was peaceful, even joyous, and beautifully diverse.

More pictures of people carrying rifles at the #VirginiaRally and more evidence that debunks the narrative that the rally is filled with racists and white supremacists. pic.twitter.com/V0jGLpKW2d

An attendee at the rally in Richmond Virginia dispels the media smears against rally-goers.

He says the media is mischaracterizing them, and he's right
# Black Panthers #VirginiaRally
pic.twitter.com/HzBbZ4y4Vy

I came out as gay after the Pulse nightclub terrorist attack.

President @realDonaldTrump is my candidate because he protects my right to keep & bear arms.

What a great day expressing our First Amendment rights in Richmond today at the #Richmond2ARally. We will not be quiet as our Constitutional rights are trampled on. #VA10 #LobbyDay2020 pic.twitter.com/rENZ9gE3np

Representation for the gay community is also in attendance at the 2nd amendment rally in Richmond, Virginia.

The media won’t show you this.

“Sir, are you a White Supremacist?” pic.twitter.com/JFhxLRfgv1

"As an African American on MLK day, it's critically important to preserve the ability to defend ourselves and our loved ones"pic.twitter.com/eGoVDDZdPm 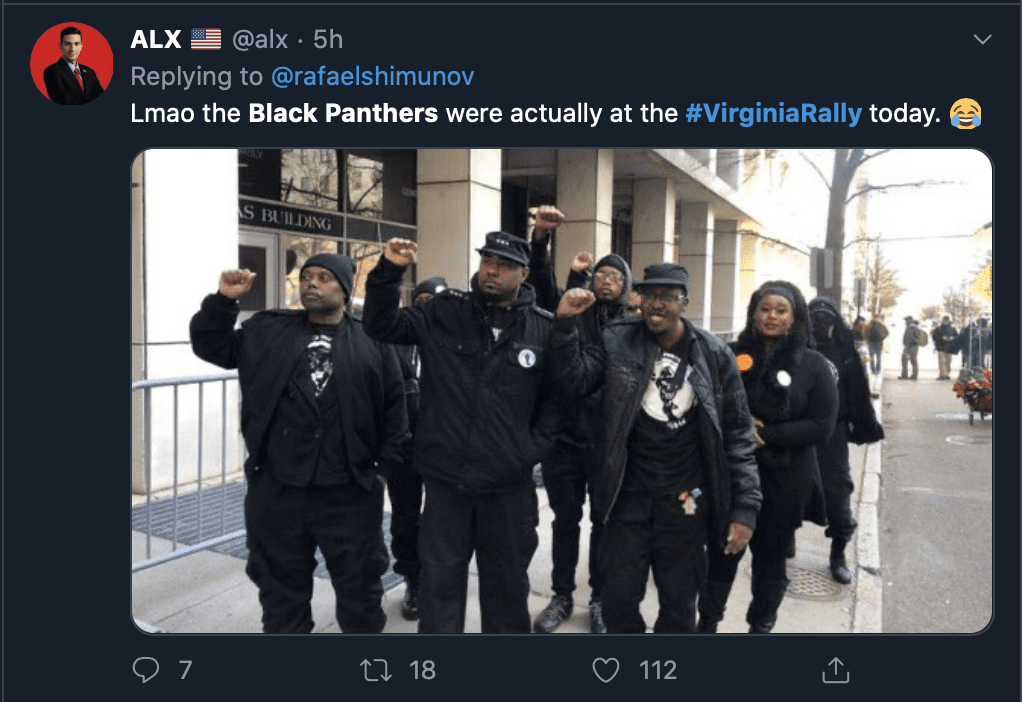 Newsbusters did a great job at snagging some of the media fear-mongering:

#NEW MONTAGE from me showing how @CNN and @MSNBC spent their mornings hyping fears that "white nationalists" and "extremists" would cause "violence" at #VirginiaRally for the #2A like in 2017 at Charlottesville #LobbyDay2020 pic.twitter.com/wR91mMPfmR

Later some admitted that none of the violence they hyped came to pass:

CNN: Threats which caused Gov. Northam to call for a State of Emergency "Have simply not emerged".. "The police very clear in saying they have not had a single arrest during this rally and we have been standing here all morning" pic.twitter.com/6p2JfebvFO

Those in media who generously gave Governor Blackface a pass had the audacity to join him in his attempt to erase minority participation and defense of natural rights from the history books while casting the entire rally as a potential riot of white supremacist militia monsters.

No one assaulted anyone, burned down buildings, destroyed private property, or took a dump on a car.

What is so striking about the scene at the gun rights rally in Richmond is what you don’t see: almost no cops. Just that little cluster of state police there. No lines of riot cops. No law enforcement in riot gear. pic.twitter.com/W0jkwYmmkP

I spoke with Cam Edwards earlier today about the Virginia rally:

The Second Amendment — and all natural rights — are the biggest areas of common ground, and this was visible today in Richmond. We all may not always agree on every issue — and that’s OK. However, we DO agree that we have the right to self defense and the right to preserve the republic against tyranny as enshrined in the Constitution. I will go to the mat for my rights and yours.