For the past couple of years I’ve discussed over-reliance on mostly-Chinese controlled materials, everything from rare earth minerals to electronics. Now as the drip of damning information on China’s malicious handling of the Wuhan Coronavirus pandemic turns to a steady stream, media are being forced to report what they can no longer defend. Three weeks ago I wrote this about China’s politicization of the World Health Organization, their persecution of journalists and arrest of doctors, and their overall culpability in kickstarting a pandemic that has killed thousands:

The bigger point here is that so too is fashion now replying upon cheap and abused Chinese labor, in a manner similar to how the U.S. relies on China for cheap products and antibiotics. Lots of money going back to Beijing’s communists in exchange for quick satisfaction. Instead of focusing on this, many in our media are parroting China’s communist propaganda. In fact, the majority of our media aren’t even piecing together that Taiwan successfully curtailed the Wuhan Coronavirus/COVID-19 despite every effort by China to exclude them from WHO walks — nor are they asking why Taiwan was excluded when other countries might have learned from their efforts.

I noted, too, the press’s adoption of China’s identity politics propaganda defense. Media can no longer justify ignoring this story of China’s culpability and many just waking up to this reality are now seeing what some foreign countries have warned about for years.

This comes on the heels of an online petition circulating demanding the replacement of Tedros Adhanom Ghebreyesus as the Director General of the WHO due to his complicity in aiding China’s malicious handling of a pandemic. The WHO covered for China repeatedly even after China knew the truth from the doctors they arrested and news reports they deleted. 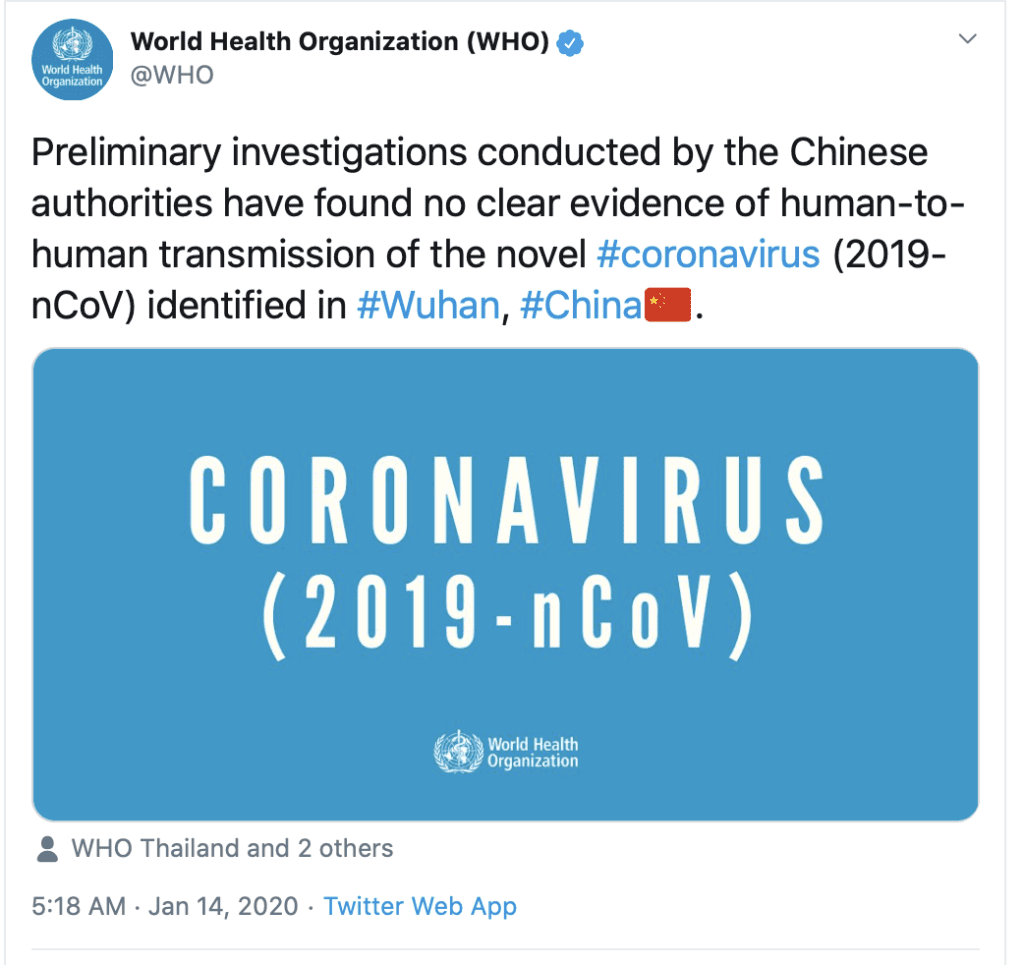 This was also false, as the doctor who suspected otherwise (and gave his life for it) was persecuted by his own country for trying to warn the public.

That U.S. intelligence warned the administration that China lied is now making headlines:

China has concealed the extent of the coronavirus outbreak in its country, under-reporting both total cases and deaths it’s suffered from the disease, the U.S. intelligence community concluded in a classified report to the White House, according to three U.S. officials.

The officials asked not to be identified because the report is secret, and they declined to detail its contents. But the thrust, they said, is that China’s public reporting on cases and deaths is intentionally incomplete. Two of the officials said the report concludes that China’s numbers are fake.

The report was received by the White House last week, one of the officials said.

Remember, the WHO released a statement praising China for their “transparency:”

The Committee welcomed the leadership and political commitment of the very highest levels of Chinese government, their commitment to transparency, and the efforts made to investigate and contain the current outbreak. China quickly identified the virus and shared its sequence, so that other countries could diagnose it quickly and protect themselves, which has resulted in the rapid development of diagnostic tools.

Not so, said a former aide to the National Security Council:

Gen. Robert Spalding, the former senior director for strategy at NSC, told Hill.TV that it was “terrible” that China wasn’t “transparent and open about what happened with the coronavirus.”

“It’s not just terrible for coronavirus but it’s also terrible for the next potentially global pandemic that might come across,” he said.

Despite identifying the earliest case of the Wuhan Coronavirus back in November, China withheld critical data that prevented the countries of the world from preparing their own populations for impact. China arrested Dr. Li Wenliang on January 3rd for daring to warn the public. Communism and its censorship created this pandemic. Dr. Deborah Birx confirmed this in yesterday’s daily Coronavirus Task Force press conference while explaining how China’s delay to report data put everyone else behind in preparation:

“When you talk about could we have known something different, you know, I think all of us — I mean I was overseas when this happened, in Africa, and I think when you look at the China data, originally, and you said, ‘Oh well, there’s 80 million people, or 20 million people in Wuhan and 80 million people in Hubei,’ and they come up with the number of 50,000, you start thinking of this more like SARS than you do this kind of global pandemic.”

We believe the organization’s director-general, Tedros Adhanom Ghebreyesus, like China’s Xi Jinping, should be held accountable for recklessly managing this deadly pandemic. Tedros apparently turned a blind eye to what happened in Wuhan and the rest of China and, after meeting with Xi in January, has helped China to play down the severity, prevalence and scope of the COVID-19 outbreak.

From the outset, Tedros has defended China despite its gross mismanagement of the highly contagious disease. As the number of cases and the death toll soared, the WHO took months to declare the COVID-19 outbreak as a pandemic, even though it had met the criteria of transmission between people, high fatality rates and worldwide spread.

When President Trump took a critical step to stop the coronavirus at U.S. borders by issuing a travel ban as early as Jan. 31, Tedros said widespread travel bans and restrictions were not needed to stop the outbreak and could “have the effect of increasing fear and stigma, with little public health benefit.” He warned that interfering with transportation and trade could harm efforts to address the crisis, and advised other countries not to follow the U.S. lead.

China tried defending itself with propaganda blaming the United States. This further infuriated the UK, who lashed out at China with ministers and senior officials telling the Sunday Mail that China faces a “reckoning.”  Michael Gove, Minister for the Cabinet Office, accused China of lying about their infection rate and fatalities while other officials accused the communist country of exploiting the pandemic to expand its economic influence by way of aid to other countries struggling with pandemic response. China’s data suppression is even said to have jeopardized the Huawei deal, the mere prospect of which (due to accusations that Huawei’s engaged in IP theft, plus China’s overall intent) angered Trump.

China is in damage control mode, but the damage has been done, lives lost, trust and any chance for goodwill irrevocably destroyed.

Related: Last week I spoke with Gordon Chang, author of The Coming Collapse of China on my program about the pandemic and China’s role: