A friend of mine who works in the film industry sent me this from their union a bit ago: 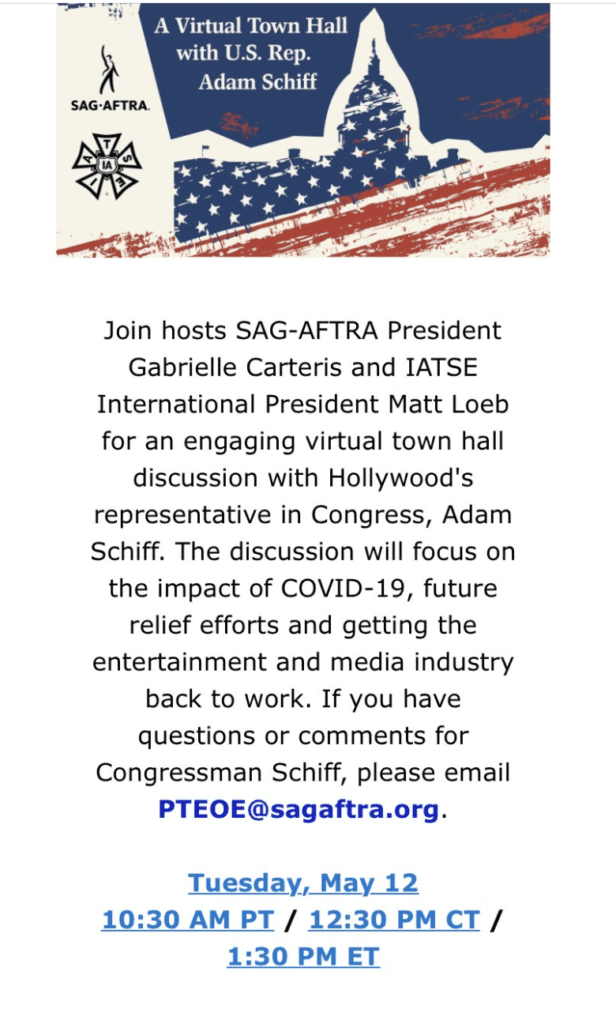 It sounds like Hollywood is going to press their congressman, Adam Schiff, to get them back to work. This will put Schiff in a difficult spot because he obviously has higher ambitions (but lacks the self awareness to realize that he’s never going beyond his current power status) so he is more motivated to go along with the national progressive status quo. Will he crumble when Hollywood denizens tell him they need their industry back, support lightening the restrictions? Or will he risk fundraising and optics by telling them we have to remain under house arrest until a never-happening 100% foolproof cure vaccine is developed?

Interesting conundrum when some of the biggest advocates for our national house arrest belong to an industry that isn’t just getting ravaged by the lockdown — but may see the nature of film distribution change dramatically:

Theaters were struggling before coronavirus. According to data from Box Office Mojo, in 2019, Americans went to the movies less than any time since the 1920s.

Losing their exclusive window is a death sentence. Millions of folks will choose to watch movies at home instead. Five years from now, theaters will be like record stores.

Many blockbusters have been delayed and no one is quite sure when a “return to normal” will occur, or if it will. And this:

A third, albeit still remote, scenario envisions a graver future — namely, a move away from the theatrical release calendar entirely. As the spread of the coronavirus throws traditional studios into disarray and back-lot executives fret as to whether audiences will return to the multiplex in a post-COVID-19 world at all, the Amazons and Netflixes appear to be in a better position to green-light major movie projects at a competitive scale and volume.

It’s somewhat ironic that during a time when people shut in at home need an escape, the movie-making factory most responsible for providing it is locked down, too.