I’ve been careful about this phrasing because I dislike hyperbole, but it’s difficult to not legitimately wonder when I see things like this: 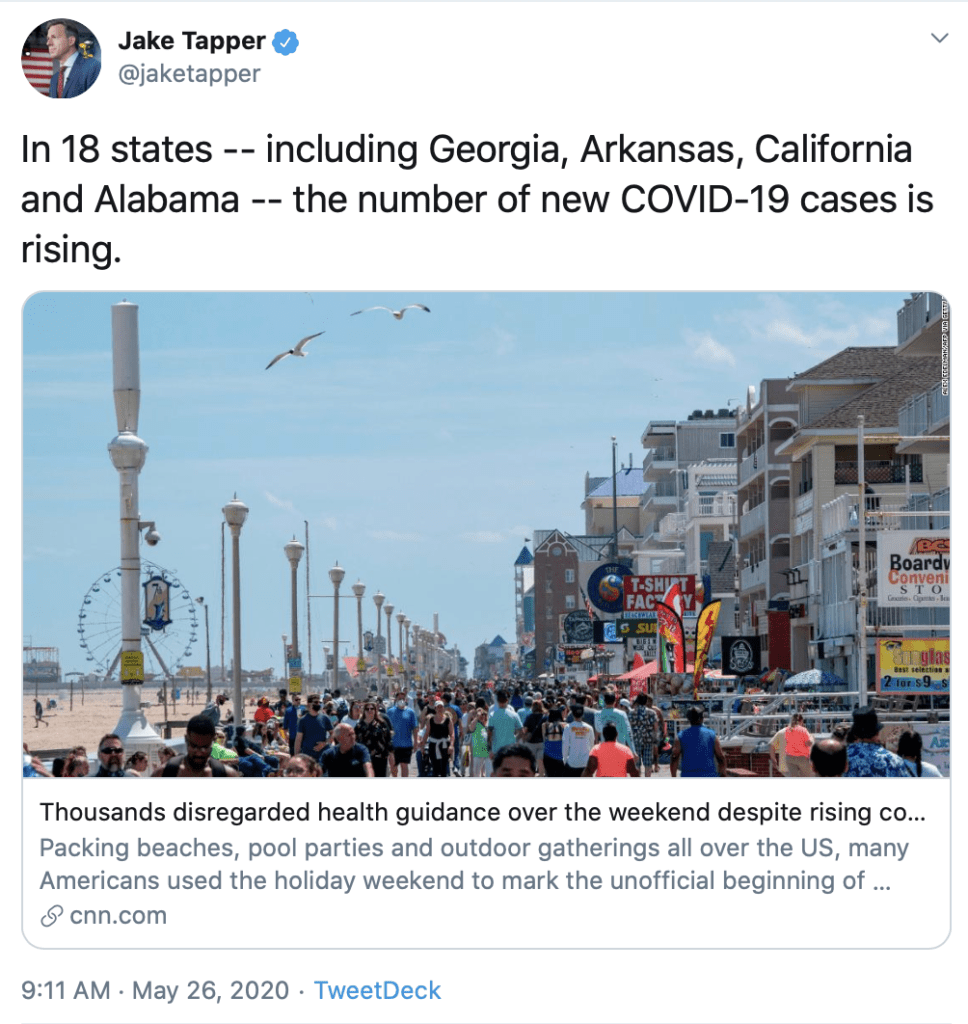 It isn’t reporting to state that there is a rise in cases without providing the context that the “rise” is due to the increased testing. There is no context given to the severity of these cases, whether they are hospitalizations; there is no context given to the recovery rate vs the fatality rate, either. The entire point seems to encourage belief that the country’s reopening is responsible for increased cases when Drs. Fauci and Birx both said that the increased testing would mean an increase in reported positive cases. This sort of propagandizing was at play in Texas media where the number of positive cases was reported as a consequence of the state’s reopening rather than the point of increased testing. This is basic data analysis.

Politico hit on this yesterday:

Furman, tapped to give the opening presentation, looked into his screen of poorly lit boxes of frightened wonks and made a startling claim.

“We are about to see the best economic data we’ve seen in the history of this country,” he said.

The former Cabinet secretaries and Federal Reserve chairs in the Zoom boxes were confused, though some of the Republicans may have been newly relieved and some of the Democrats suddenly concerned.

“Everyone looked puzzled and thought I had misspoken,” Furman said in an interview. Instead of forecasting a prolonged Depression-level economic catastrophe, Furman laid out a detailed case for why the months preceding the November election could offer Trump the chance to brag — truthfully — about the most explosive monthly employment numbers and gross domestic product growth ever.

Furman’s counterintuitive pitch has caused some Democrats, especially Obama alumni, around Washington to panic. “This is my big worry,” said a former Obama White House official who is still close to the former president. Asked about the level of concern among top party officials, he said, “It’s high — high, high, high, high.”

Federal Reserve of St. Louis Chairman James Bullard believes the jobless rate will be back below 10% by December. Democrats’ best chance at hitting Trump electorally is convincing voters that he’s bad for the economy. A rebound, especially one as fast as some experts predict, is disastrous for their campaign strategy. This public knowledge, coupled with the manner in which their media surrogates report the virus’ status, makes rational people question the motives of Democrats and media.