This is the million dollar question.

There are questions surrounding the lead up to the gunfire, but everything on video seems to start with a guy wearing a red shirt tied around his head chasing Rittenhouse across a parking lot.

So far, this is the best all-angles breakdown online. Warning, this is graphic. 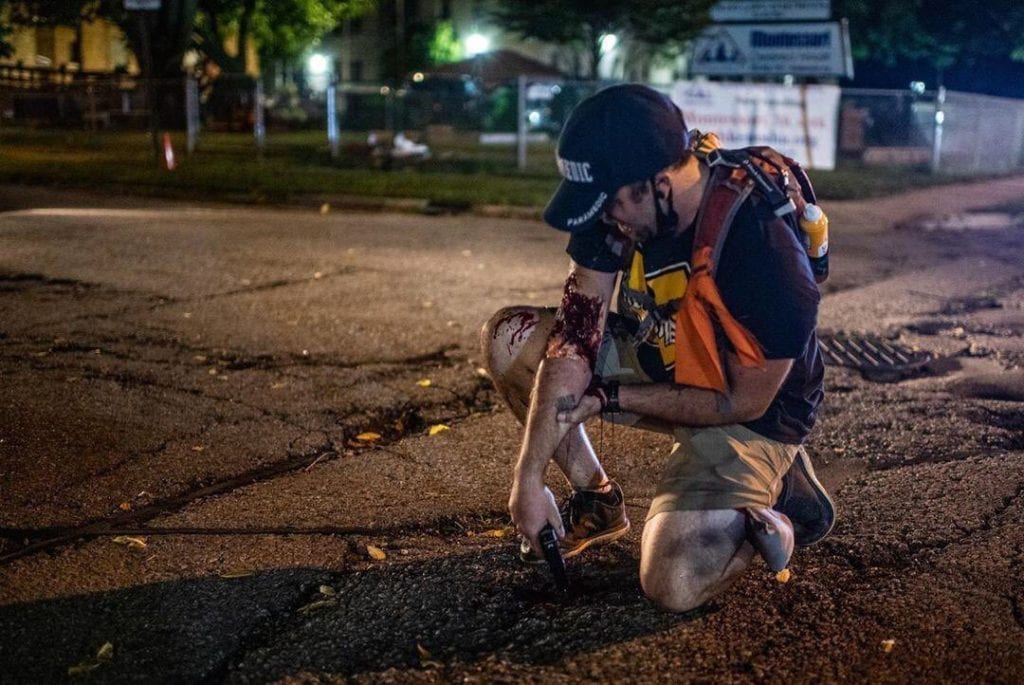 This dude is clearly holding a handgun. This may be the answer you’re seeking for the question “why would someone charge a guy with a rifle?” 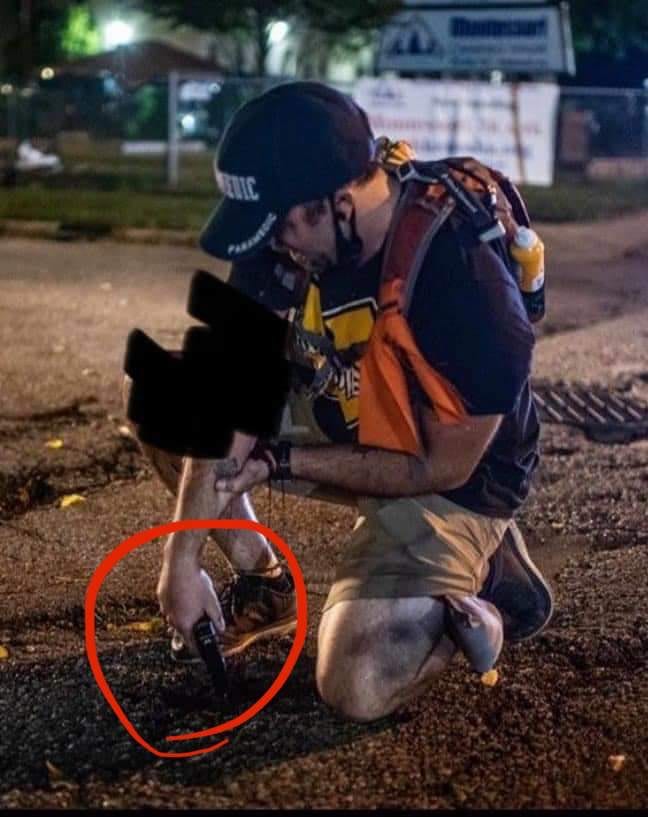 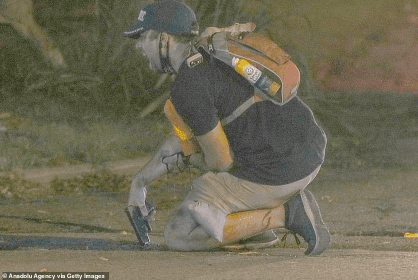 Here’s a still from when he drew and charged Rittenhouse: 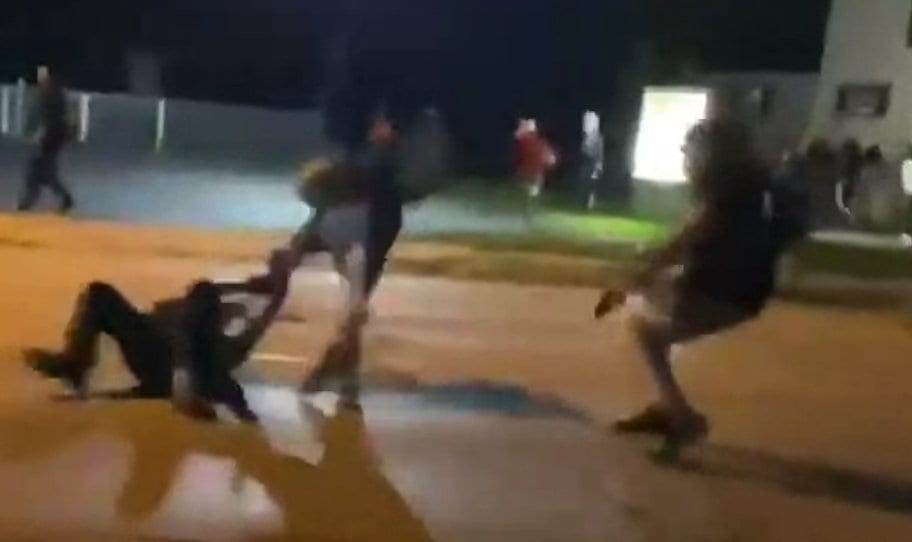 Leon Wolf has information possibly related to the man wearing the red shirt on his head. I don’t know what happened before this person began pursuing Rittenhouse. I don’t know whether it was in response to aggression from Rittenhouse, if Rittenhouse had shot someone before reportedly first shooting the guy in the red shirt after said guy began pursuit, or if the guy with the red shirt on his head was simply behaving as a member of the rage mob and decided to charge at Rittenhouse and, as a couple of reports say, throw a molotov cocktail at him. Wolf writes that Rittenhouse was part of an armed group harassed for protecting businesses. No one knows when the aggression began and with whom, but a lot of people on Twitter are pretending that they do.

I think the entire thing will hinge upon whether or not Rittenhouse was the aggressor and whether or not the prosecution can prove that Rittenhouse’s use of deadly force was unreasonable. If the guy in the red shirt sought to single out Rittenhouse because he was younger and the aggression began there, then this appears to be self defense. As I understand it, Wisconsin is not a stand your ground state, though they do have castle doctrine, which is entirely different and would be misapplied in this case — unless the business Rittenhouse was protecting was his or as I understand it, his employer. The basic difference between these statutory rights:

Castle Doctrine: means the victim can defend themselves against an intruder if that intruder unlawfully enters victim’s home, vehicle, place of business. Not all castle doctrine laws are the same with some more restrictive than others. Missouri, for instance, is considered to allow more leeway than others in the country.

Stand Your Ground: means the victim has no duty to retreat before defending themselves from threat of bodily harm or death. You don’t have to be only in your home, vehicle, or place of business.

1) Let’s dispense with this silly argument that a supporter of law enforcement immediately translates to mass murderer. I see a lot of write-ups suggesting that because Rittenhouse had Blue Lives Matter stuff on his Instagram that he was angling for retribution. This is moronic, such insipid arguments should be publicly ridiculed, and I have nothing but contempt for silly people hellbent on expediting our national descent into Idiocracy with their reductive remarks.

2) Why the hell was a 17 year-old out on the streets at night during a riot? I’m not asking this as a Second Amendment advocate, I’m asking this as a mother who is also a Second Amendment advocate. I see his 17 year-old age as the immediate issue. He’s one year off from even being old enough to serve his country in battle. My teenage son is more proficient in firearms than most adults and an excellent marksman (to the point where he helps manage the range when we’ve taken large groups with us to shoot) but I can guarantee you that there is no way in hell I would ever allow my minor offspring in the street at night during a violent riot. Was Rittenhouse protecting his family’s business and they were short on people to help? I want to understand this. I also bring it up because depending on how aggressive the prosecutor is in this case, I’m curious as to whether or not they’ll try to lob charges at the parents. This interview was done before the shooting:

I interviewed the alleged shooter before the violence started.

3) Regardless your view on firearms (clearly you know mine) current Wisconsin law is at odds with 17 year-old Rittenhouse carrying a firearm:

Furthermore, there could be charges against whoever gave him his rifle. Regardless your views on this law, it’s law, and most definitely will be brought up in court, even if Rittenhouse is found innocent of first-degree intentional homicide. There still may be other charges brought forward, we don’t know.

4) Here’s some nuance that will be complicated for tribally partisan zealots who want gotcha quotes: From what I see on the video, and I stress, on the video, Rittenhouse didn’t just open fire randomly, spraying the mob, he specifically fired at those attacking him, even at one point (described in the video above) withholding fire when it looked for a moment like the guy charging him with a handgun was hesitating and considering retreat. That will help his defense. He’s young, but he’s not untrained — but that isn’t the point. He’s 17 years-old and his life may be irrevocably ruined forever before it even fully began. He is not considered a legal adult. He can’t even a sign a contract without a parent or guardian at 17 years-old. This is the point.

I hate that he was ever in this position in the first place — but what does that say of Kenosha and Wisconsin leaders when a 17 year-old feels the need to stand in the street with a rifle because the city has turned into a lawless hellscape? How many times did state leadership refuse help? One listener emailed and asked why didn’t Rittenhouse just enlist in the National Guard if he wanted to flex? That’s a great idea, but it only works if the governor sends out the Guard and not every governor will make that call because they’re more interested in playing chicken with Trump to see if he sends federal forces so they can cry “police state.”

5) I don’t understand the “fleeing the state” complaint. Rittenhouse was pictured walking towards the police with his hands up, was this in an effort to turn himself in or was this from earlier in the night? It’s unclear. He reportedly lives in Antioch, Illinois, just across the border, about 20 minutes away from Kenosha. He likely went home before being arrested today.

I’ll likely have more opinions on this as the story continues to develop, but these are my initial thoughts. In summary: From the video it looks inarguably like self defense but this hinges on whether or not evidence shows that Rittenhouse was aggressor and began the physical confrontation. It’s awful that a 17 year-old was put in this position in the first place. It also awful that he was there because he felt none of the other adults elected to lead were doing anything. If it comes out that Rittenhouse was the aggressor, I’ve no problem amending my thoughts here, but this is where I’m at right now.

*Update: It appears Rittenhouse did try to turn himself in earlier:

Police vehicles just one block away remain stationary during the gunfire. Rittenhouse walks with his hands up toward the police, as bystanders call out that he was involved in the shooting. The police drive by him to the scene of the shootings, without stopping. pic.twitter.com/duiec5vm5P

Andy Ngo has an update on the aggressors seen in the video:

The 3 shot (2 killed) in #Kenosha, Wisc. at the BLM riot have been identified.

Joseph Rosenbaum, 36, was the first one killed. Video allegedly shows him chasing teen shooter & throwing something at him. Rosenbaum was a registered sex offender for a sex crime involving a minor. pic.twitter.com/up1VgDyrgZ

Also, if they’re charging Rittenhouse, why are they not also charging this Grosskreutz?

The third who was shot (& survived) is Gaige Grosskreutz, 26. He's a member of the People’s Revolution Movement. He was filmed chasing after the teen w/a pistol. He was shot at close-range in the upper arm. He has a criminal record that includes being intoxicated & armed w/a gun. pic.twitter.com/U9Q3R7pcPH

Whoa — there was another shooter? Watch this video where you see a guy firing a handgun behind Rittenhouse:

At 23:19, Rittenhouse is seen in this YouTube livestream. He's being chased into a parking lot. While he is being pursued, an unknown gunman fires the first shot into the air. pic.twitter.com/BSD8rd6ARN

This makes it harder for the prosecution to undermine Rittenhouse’s defense that he reasonably believed his life to be in danger.