The tone in St. Louis is nothing if not tense and now an area hospital, as per a staffer who wishes to remain anonymous, is warning staffers to pack overnight bags ahead of the grand jury decision. For weeks now, we have been told to expect the Grand Jury to return with a judgment in late November regarding whether or not the state intends to move forward with an indictment against Ferguson police officer Darren Wilson. And as the days pass, the November page of the calendar is quickly running out of real estate.

But the quick passage of the days are not the only reason that the tension is mounting. Other elements are lining up that could indicate the circling up of the proverbial horsemen.

1. They're importing the professional agitators. Over the last two months, quasi-locals such as Bassem Masri have kept Ferguson in the news by staging marches and roadblocks. But in the last week, they have called for reinforcements – and not just any reinforcements. Paid instigator Lisa Fithian joined several other leaders in St. Louis in a coordinated effort to educate and organize protesters. Scheduled “classes” taught them what locations to target and how to maximize their exposure. They were taught how to walk the line and avoid arrest, and how to ensure that if they are arrested the police come out looking like the bad guys.

2. Schools are sending students in and around Ferguson home with packets containing extra homework assignments. After school start dates were pushed back due to protests, the schools are doing everything they can to make sure that students who have already missed several days of classes do not get further behind.

3. Missouri Governor Jay NIxon has declared a state of emergency, activating the National Guard. Nixon may be attempting to regain ground lost when he fumbled the beginning stages of this crisis, but he may also just be preparing for an imminent grand jury decision. It's also possible that he simply wants to throw out some disinformation to keep people guessing as to the date of the announcement.

4. People are noticing heightened security. A local Navy Veteran noticed vehicles bearing the mark of the Department of Homeland Security parked at the hotel where he worked. When he posted pictures of them on his social media accounts, he found himself searching for a new job. A local hospital (according to a source who wishes to remain anonymous) has sent out an email warning employees of possible contingencies that could be implemented in the event of unrest. They advised all employees to keep their phones fully charged and to carry medications, toiletries, and even a change of clothing. 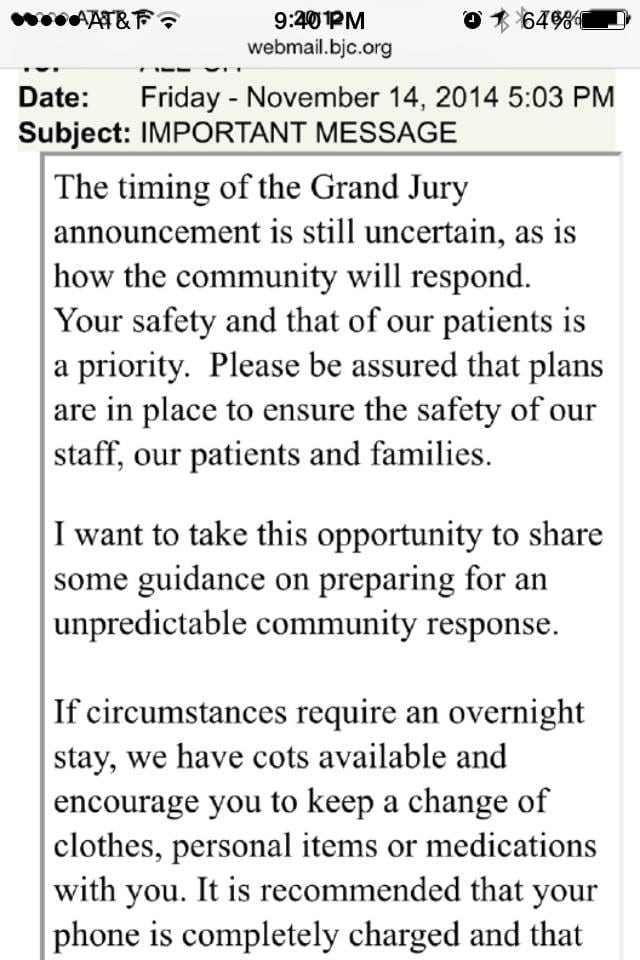 While none of this definitively points to a date and time, when all the pieces of the puzzle are taken all together a picture begins to form.

And I would like to offer one word of warning: Until the announcement of the Grand Jury's findings – and for at least the few days immediately following the decision – national attentions are likely to be focused on Ferguson and the St. Louis area as a whole. The Obama Administration KNOWS THAT. So while the world watches the right hand, we would do well to keep tabs on what the left is doing as well.