Oh joy, we can thank Joe Biden for bringing the perpetually Reality Bit wonder from El Paso, Beto O’Rourke, back onto the national stage by prematurely appointing him Gun Control Czar.

“I want to make something clear, I’m going to guarantee you this is not the last you’ve seen of him,” Biden said Monday evening during a campaign rally in Dallas. “You’re going to take care of the gun problem with me. You’re going to be the one who leads this effort.”

Biden was probably just happy to still have a political career at that point and O’Rourke was just happy to finally get a job not arranged for him by a family member.

Fast-forward to today, when Colorado Congressman Ken Buck  — who was way too late with this video response —  decided to show off his well known inoperable AR-15 with a sweet American flag Cerakote (inoperable because it has a trigger lock and it’s missing its bolt carrier group, Buck described it as a “beautiful, patriotic paperweight“). Yes, he flagged the cameraman, which we call bad firearms etiquette regardless the operational ability of the rifle.

I have just one message for Joe Biden and Beto O’Rourke, if you want to take everyone’s AR-15s, why don’t you swing by my office in Washington, D.C. and start with this one?

Come and take it. #2A pic.twitter.com/jG2SiXetov

Cue the mob of Karens trained to emit Pavlovian responses to firearms or firearm-shaped objects. Rep. Haley Stevens demanded to speak to the manager about gun control:

Your congressional office is not your private home. It is a public space.

This behavior is threatening and unacceptable. I feel unsafe with this in my place of work.

I have been in contact with the Sergeant at Arms to express my concerns. https://t.co/UTbNBXLziW

Buck’s inoperable rifle has hung  on his office wall since 2015 without incident — ever since the Capitol Police inspected it and gave him the all clear to hang it.

Cue O’Rourke, who is apparently already on the clock for Biden:

This guy makes the case for both an assault weapons ban and a mandatory buyback program better than I ever could. These are weapons of war that have no place in our communities, in our politics or in our public discourse. https://t.co/ce5PvaxqMk

Oh for crying out loud. These aren’t “weapons of war” anymore than my .38 revolver is a “weapon of war” or a bolt action rifle is a “weapon of war.” Buck and his inoperable, wall-mounted firearm have threatened fewer people than O’Rourke drunk-driving his automobile down the highway, but you don’t see O’Rourke calling for “common sense automobile ownership.” Also — there is no such thing as a “mandatory buyback.” That phrase is BS for “stealing people’s lawfully-owned personal property and paying them off with their own tax dollars,” a.k.a. double thievery. 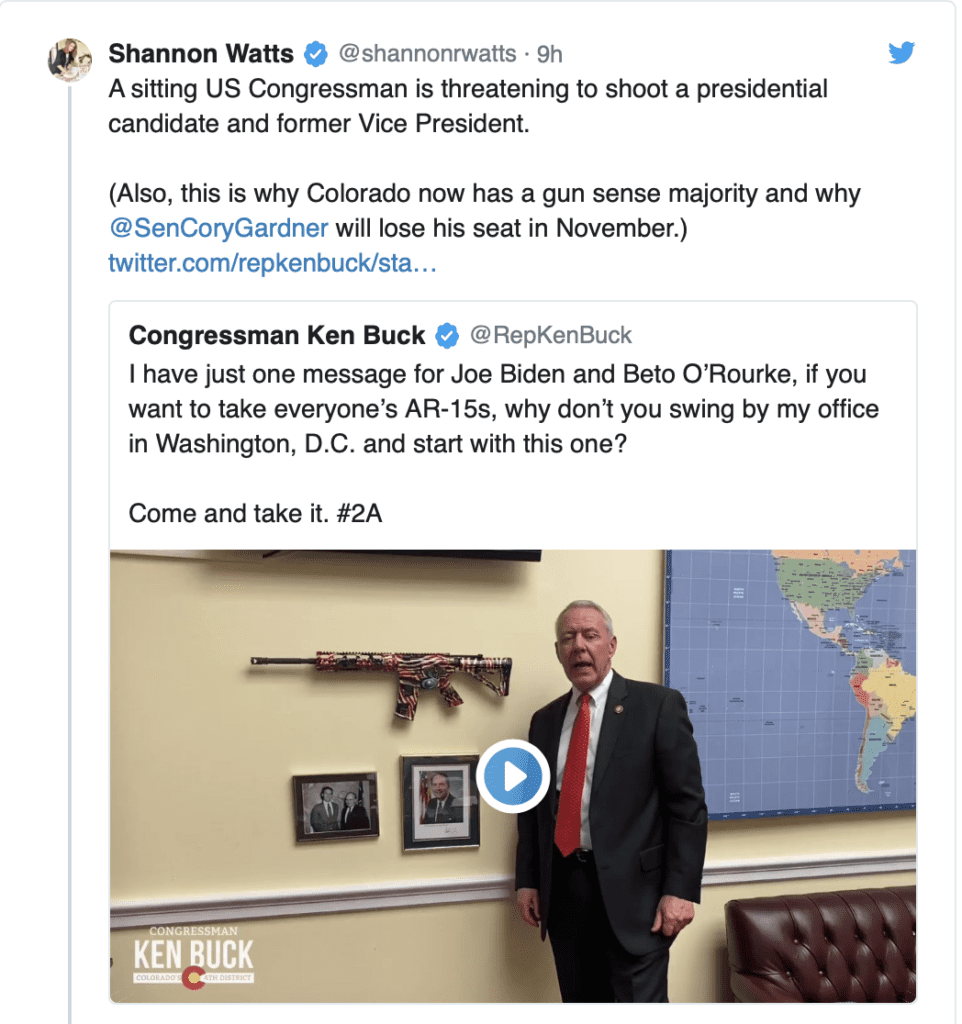 The only thing Buck could do with his paperweight is hit someone over the head with it. If only these Internet Karens put as much effort into educating themselves on the issue for which they claim so much passion — and if only they knew the history of “come and take it.”