A mother in Colorado is abusing the state’s new red flag system by falsifying an ERPO petition against the officer who shot and killed her 19 year-old son when he charged at officers with a knife. 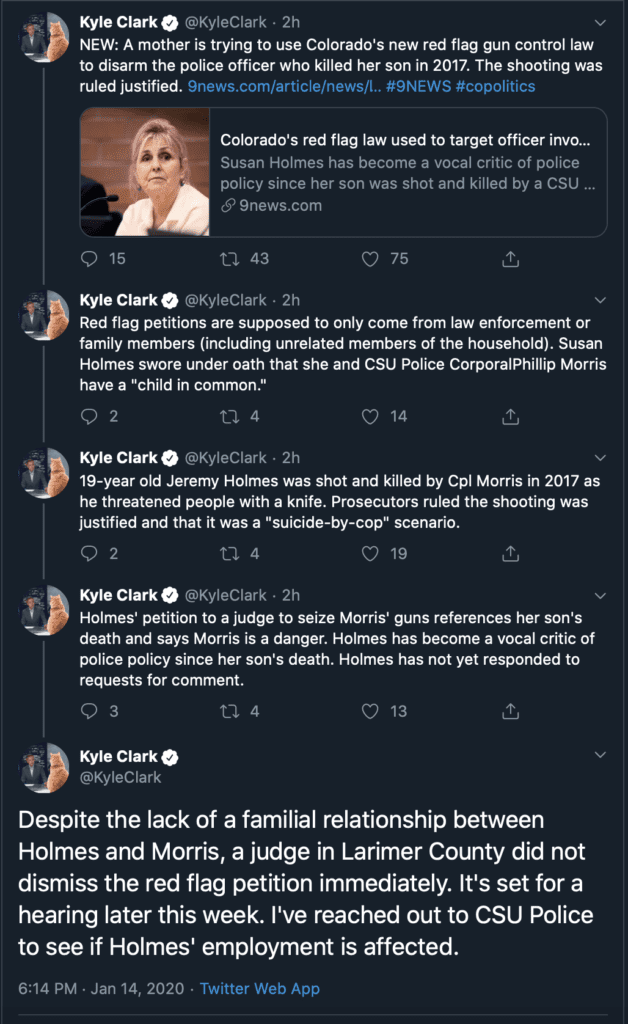 In her petition, Holmes wrote that Morris is a family member, specifically noting that they have a child together. That is not true.
On her petition, Holmes also checked the box next to the question of whether this person has posed “a credible threat of or the unlawful reckless use of a firearm.” In her explanation, she wrote: “Phil Morris used his firearm to recklessly & violently threaten and kill 19 year old Jeremy Holmes.”

Despite lying on the petition, the hearing is this week. That it wasn’t tossed out for fraud is astounding. Holmes wants to play semantics:

In the ERPO, under penalty of perjury, Susan Holmes claims she has a child in common with CSU police Officer Phillip Morris.

Holmes told the FOX31 Problems she planned to argue in court that she had a different interpretation of what “have a child in common” actually means.

Jeremy Holmes was told over 40 times to drop his weapon. His mother called law enforcement to report that he had a weapon and the intent to kill his brother and sister-in-law. The encounter and shooting was captured on Morris’s body camera.

There were protections in the earlier version of the red flag bill that was signed into law; in many versions of this law there are zero protections against false reporting. These are just some of the dangers that I and many others warned about when these policies first came up for discussion. The law’s text:

The respondent can motion the court once during the 364-day ERPO for a hearing to terminate the ERPO. The respondent has the burden of proof at a termination hearing.