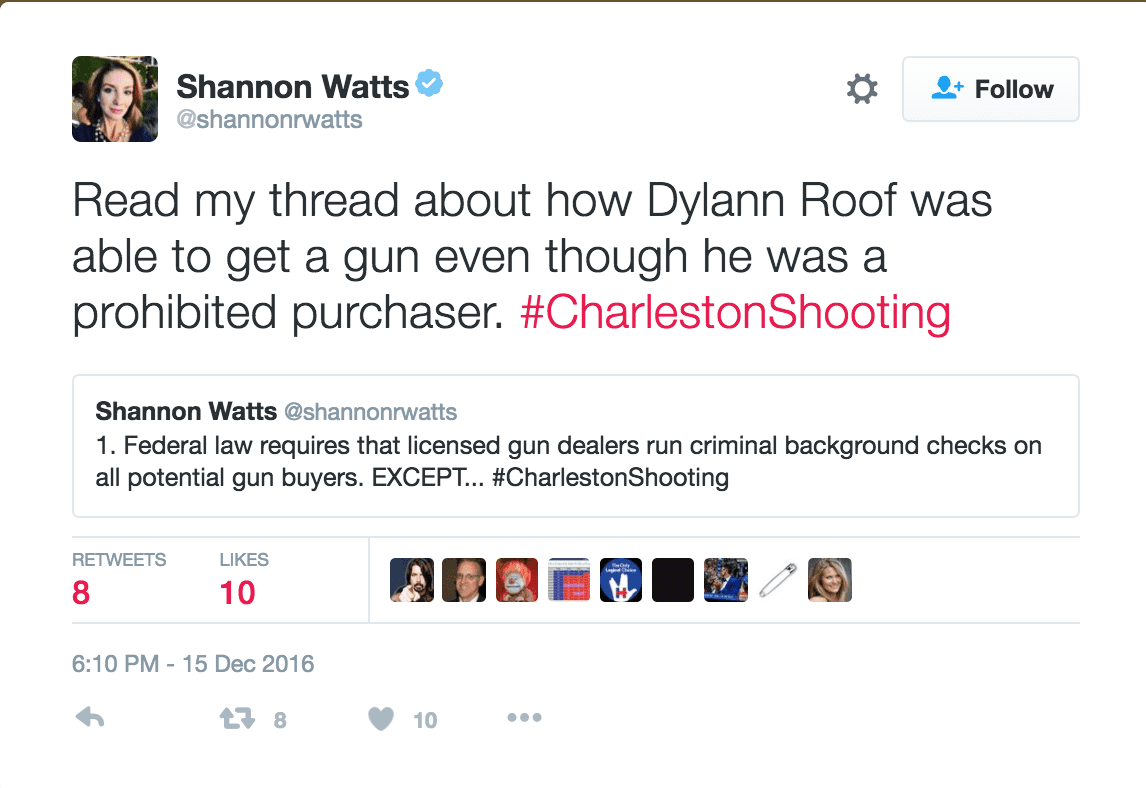 One more day wouldn’t have mattered. The FBI director has said that clerical errors led to Roof being able to legally purchase the gun in April 2015, and the FBI didn’t confirm that the sale shouldn’t have been allowed until after the shooting two months later.

Instead of believing a flack specifically hired to push an agenda over facts, read FBI DIrector James Comey's statement on what actually transpired, bold my emphasis:

I want to describe the particulars of the Roof gun purchase and background check, because Roof should not have been allowed to purchase the handgun. Here is what happened, as I understand it today:

First, she went on the website of the Lexington County court to see if the matter had been resolved.

Her review of the court website showed that Roof was a defendant there but there was not yet a disposition in the case, which meant he was not a convicted felon. She didn’t stop there.

Second, she faxed a request to the Lexington County Sheriff’s Office asking for more details on the case.

Third, she faxed a similar request to the Lexington County prosecutor’s office.

She heard back from the sheriff’s office, telling her that the case was not theirs, and that she should check with the Columbia Police Department.

Not knowing the geography, she did what she was supposed to do and followed our protocols. Examiners use contact sheets that list criminal justice organizations, organized by state and county. Because the arrest was attributed to the Lexington County sheriff, she was obviously dealing with Lexington County, so she pulled up the sheet for that county. As she examined it, she did not see a listing for a “Columbia,” but she did see a listing for “West Columbia.”

Informed by the fact that the gun had been bought in West Columbia and that it was the only listing on the sheet for such a name in Lexington County, she contacted the West Columbia police. They replied that they had no record of such a case.

The contact sheet for Lexington County did not list the Columbia police. Instead, Columbia PD was listed as a contact only on the sheet for Richland County. But the examiner never saw that sheet because she was focused on Lexington County.

So the court records showed no conviction yet and what she thought were the relevant agencies had no information or hadn’t responded. While she processed the many, many other firearms purchases in her queue, the case remained in “delayed/pending.”

By Thursday, April 16, the case was still listed as “status pending,” so the gun dealer exercised its lawful discretion and transferred the gun to Dylann Roof.

After that horrific day when Roof allegedly used the gun in Charleston, the matter was obviously researched and the rap sheet confusion—listing the arresting agency as the Lexington County Sheriff—and the internal contact sheet omission were discovered. But the bottom line is clear: Dylann Roof should not have been able to legally buy that gun that day.

Those are the facts as we know them today. I have directed a full review of the matter by our Inspection Division and given them 30 days to report back to me. I will provide an update to you. I not only want to understand all the facts, but I want to know if there are ways to improve our process, our procedures, and our training. We are all sick that this has happened. We wish we could turn back time, because from this vantage point everything seems obvious, but we can’t.

What we can do is make sure that we learn from it, get better, and work to ensure that we catch everything.

The system isn't perfect. It is only as effective as the people running it. I covered this extensively:

Roof was charged with felony possession in February, 2015:

According to South Carolina court documents exclusively obtained by Radar, Roof, 21, was arrested in Lexington County on felony charges of possession of cocaine, methamphetamine and LSD on February 28, 2015.

This alone disqualified him from legal carry and purchase of a firearm. In South Carolina, you only have to be charged with a felony to lose your 2A right. Roof would have failed a background check to purchase a firearm. It was reported that his father purchased him a handgun for his 21st birthday. Roof's birthday is listed as April 4, 1994. His 21st birthday was this past April. Two months after he's charged with a felony his father buys him a gun? This means if his father purchased a gun for his birthday it was a straw purchase, a felony, punishable by up to 10 years in jail and a $250,000 fine.

In order for laws to work, criminals must follow them.

Bottom line: He was ineligible to carry and the truth will out in this. Three things to consider, however:

1) If Roof, who was ineligible due to the pending felony charges (remember, charges only for ineligibility in SC) purchased a firearm through a storefront, that store will likely face charges and lose their FFL. It's a violation of federal law to make an illegal sale such as this.

2) If such a sale was allowed to go through and his 4473 wasn't flagged, who in the state did not note this on his record? What is the point of having a law that a felony charge renders someone ineligible to exercise 2A if nothing is noted on the record to prevent a background check from going through? What is the point of laws if the state refuses to enforce them? …

Comey admitted that the FBI made a mistake. Anti-gun lobbyists want to punish all law-abiding Americans for the FBI's mistake. Shannon Watts's goal is to render all Americans prohibited possessors. 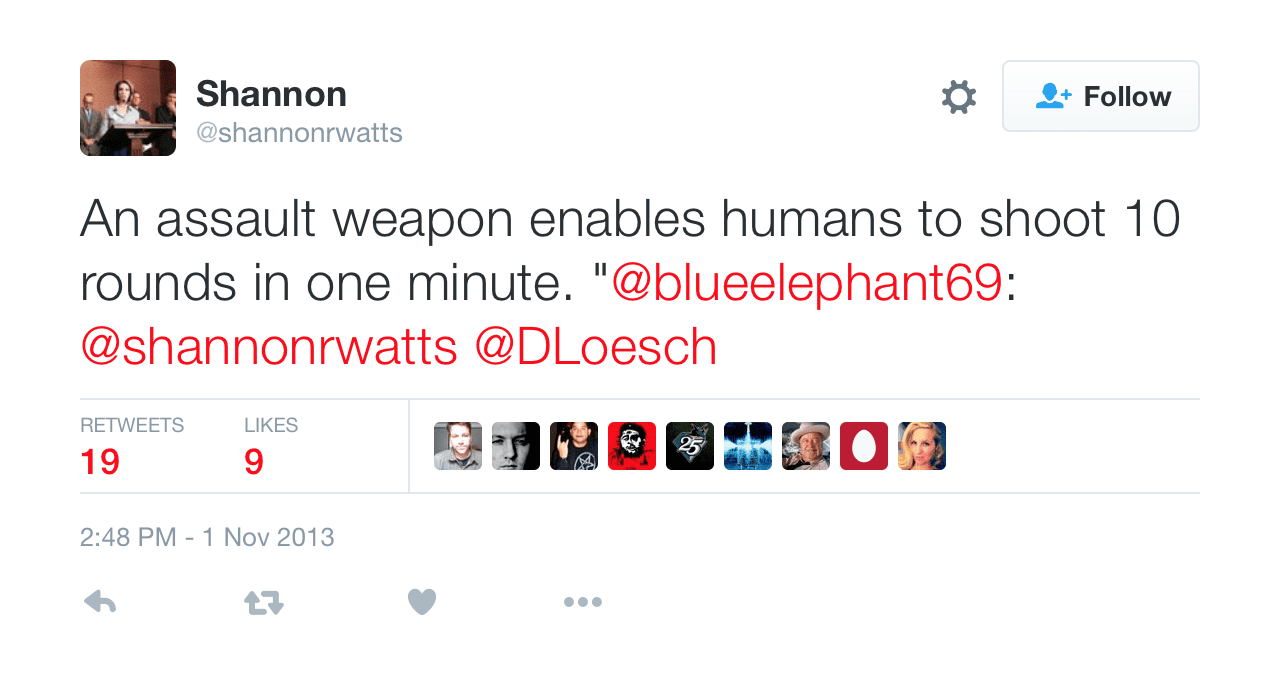 There is no empirical evidence showing that waiting periods reduce violent crime—although we have evidence that waiting periods kill people. So do gun-free zones. I agree with the conclusion of the CDC report commissioned by President Obama in 2013 which stated that firearms are an “important deterrent against crime.”