As I said months ago on the radio program, Kamala Harris would be Biden’s VP choice. If you subscribe to the newsletter I brought it up again a few of weeks ago: 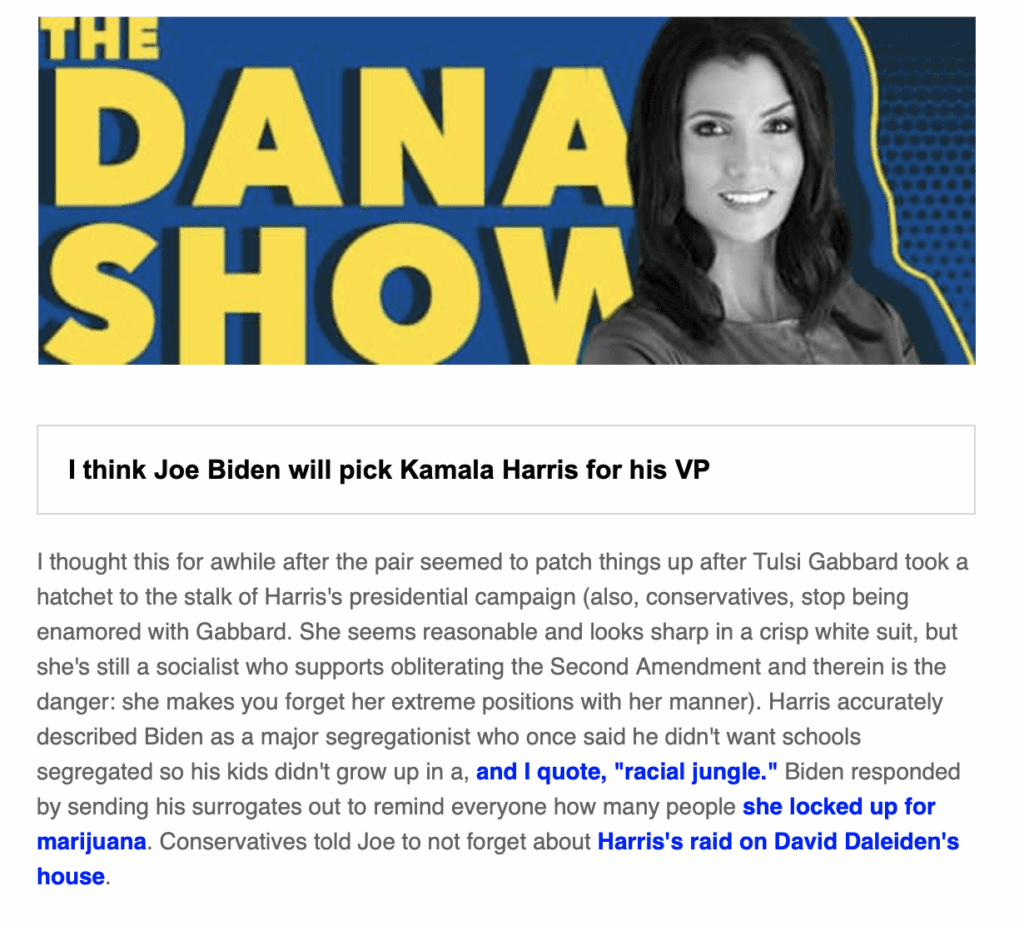 I wrote at the time:

Things were silent for awhile on the VP front, except for Stacey Abrams who wouldn’t stop talking about how she was robbed because people legitimately did not vote for her. And then … Democrats fell headfirst into adding “defund the police” as a policy platform. Harris’s rep as California’s top cop was a negative against her during the Democrat primary, but now the party could present her as Mrs. Law and Order and check several identity politic boxes that the party base is demanding of Biden’s selection. Harris isn’t so much law and order as her panned record from twice-serving as the state AG suggests. Biden is supposed to announce his pick next week, although Politico already blew that for him.

Kamala Harris checks the correct political identity boxes: she’s a woman, she’s a black woman, she’s a progressive black woman. As the former top cop in California, she’ll bring the law and order appearance to Biden’s campaign. There is a downside, though, as her record as AG will be dissected and her “stuff the jails” approach will prove discordant with the left’s current anti-cop narrative. Tulsi Gabbard’s fan club won’t let her forget it:

This will dog Harris on the campaign trail from the right and left, while giving Republicans a great opportunity to discuss criminal justice reform and the lack of smart enforcement in some cities coupled with better deterrents, if Republicans are savvy enough to take it.

This will be awkward for them to reconcile, too:

There was a little girl in California who was bussed to school. That little girl was me. #DemDebate pic.twitter.com/XKm2xP1MDH

The left pulled the sexism card this morning before Harris was even announced and expect them to play this throughout the campaign to deflect any criticism of Harris’s record. Trump will need his female surrogates out in force while also refusing to compromise on non-conservative issues like federally-mandated paid family leave. There is a great temptation for the GOP to mistakenly forfeit some of those principles as an effort to appeal to women voters the media will say Trump can’t win, but this would be a mistake. Lower taxes, more freedom isn’t just appealing to men, it’s appealing to women, too; sexism manifests when it’s assumed otherwise, and this is a point I hope the campaign argues.

.@JoeBiden can unify the American people because he's spent his life fighting for us. And as president, he'll build an America that lives up to our ideals.

I'm honored to join him as our party's nominee for Vice President, and do what it takes to make him our Commander-in-Chief.

Harris went from “I believe Biden’s accusers” to “honored to join him.”

Not sure I recall a VP pick having to walk back so much so fast.