During my book signing at SHOT Show a gentleman approached and handed me a red Sharpie encased in a 50 cal shell. I signed his book with it and as I did he told me how his company—making pens and markers using casings—was founded. The business was his son's idea. The man lost his son in Afghanistan before the son could fully realize the business. So, the gentleman is seeing his son's vision to fruition. Every part is 100% American made, down to the ink. The company is called Junior's Bullet Pens and you can read more about SSG Chris Falkel's sacrifice and vision here.

I kept these pens in my bag, along with the company business card. It was such an amazing story from a dedicated father.

We left Las Vegas for home today and needed to check a bag. We had in our possession some large knives (courtesy of our friends Jared Ogden and Grady Powell) and we approached the American Airlines desk to check one of our bags. I fly constantly, have had multiple “encounters” with the TSA, and am incredibly familiar with what is and is not allowed on a plane in either carry on or checked bags. (I also fly with a Chrome-plated RE20 for broadcast purposes and nine times out of ten I am stopped by TSA and my mic is taken and they puzzle over it before allowing me on my way.) I figured it would be even more ridiculous with pens made of shell casings, which is why I had them in our checked bag. I rarely check a bag and when I do, more often than not it has been subjected to a search and a little tag on my suitcase informs me so when I collect it at the carousel. So, not wanting to alarm government workers who may later search my bag, I told the ticketing agent what was in my checked bag so she could warn TSA. The knives she had no problem with, it was the pens that caused her concern. Verbatim: “The knives are OK but those pens I'm not sure.” She and the other agents stared at the pens. 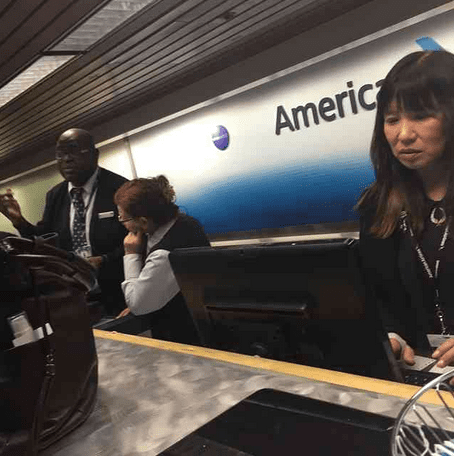 We took them apart and showed them how they were casings filled with pen guts and a Sharpie marker. After a few minutes, she left with the pens to confer with AA and TSA. After about 30 minutes of waiting at the ticketing desk she returned with a dot matrix printout of vague rules: 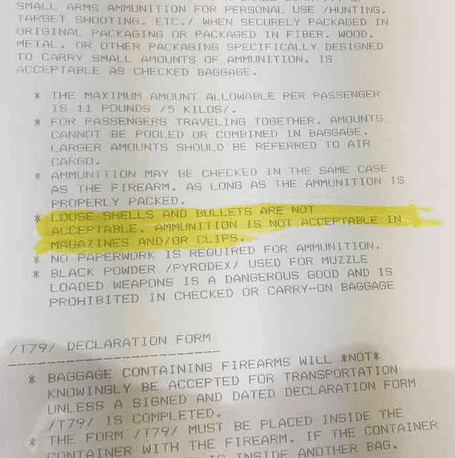 Over and over she and the other agents refered to them as “ammunition.” They are not. They are simple brass pen casings that, in a previous life, once contained gunpowder, primer, and a bullet. Because of what they used to do, they were still considered dangerous, apparently. I was informed that unless the casings were packed “in their original packaging” they would not be allowed through security. American Airlines has no problem with knives, or packed ammunition in a checked bag, but repurposed casings containing pen parts are banned from checked bags and carry on bags. The bottom line: you cannot take them, period. 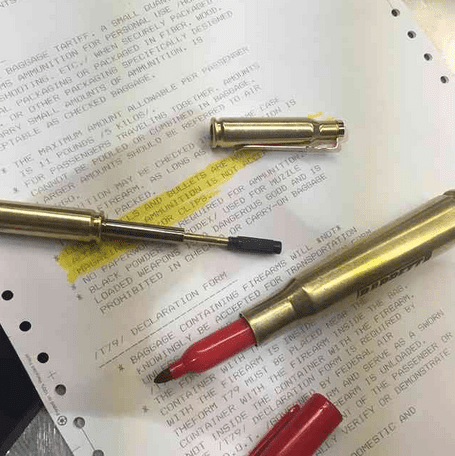 At first the agent suggested that American Airlines was going to keep the pens, at which point I asked for a reciept. Then we were told that we could keep them and mail them. Except we spent all the time that we could have mailed them at the ticketing desk instead while they debated pens, and now the post office was closed. I didn't want to throw them away, so we made our way to the USO so I could give the pens to people who would appreciate the story and value behind them. As I explained to the wonderful, smiling, generous lady at the counter why I wanted to leave the pens with them (they were shocked), she offered to mail them for us. I put every bit of cash I had into their donation box. 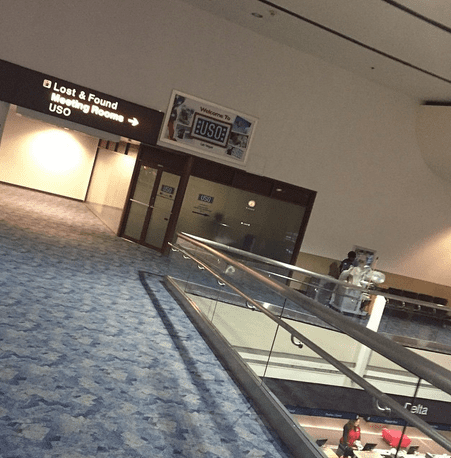 I never tried to take these pens into our carry on.

We were incredibly polite and forthcoming about what we had in our checked bag to make it easier on the agents and an overal easier process. It was not a stunt.

American Airlines should not make its employees suffer through enforcing inconsistent, poorly-written rules. It isn't fair to the employees or the customers. American Airlines execs and rule-writers should also take classes so as to better distinguish a pen from a round.

I really don't want to fly with this airline again.