“I want to tell you, Gorsuch. I want to tell you, Kavanaugh. You have released the whirlwind, and you will pay the price. You won’t know what hit you if you go forward with these awful decisions.” This was Senator Chuck Schumer’s quote today directed to two Supreme Court Justices, Neil Gorsuch and Brett Kavanaugh. This is exactly why these positions are lifetime appointments.

The problem with Chuck Schumer and his vaudevillian demagoguery “you’ll pay the price” is that the left has for years called every form of conservative/Republican expression “violence” — even hourglasses used in promos to announce new programming. We have been told that everything we say, even invocations of reductio ad absurdum, are to be taken literally. We can’t engage in serious, academic discussion in this culture for fear of partisan hatchet men maliciously misrepresenting things purposefully without context so as to impugn the character of their political target. This has been the left’s standard for the right some ten years now and it’s dumbed down discourse and murdered nuance.

The people who make these rules surely then realize that when they utter remarks like Schumer above, they must be taken literally, yes? Face value? 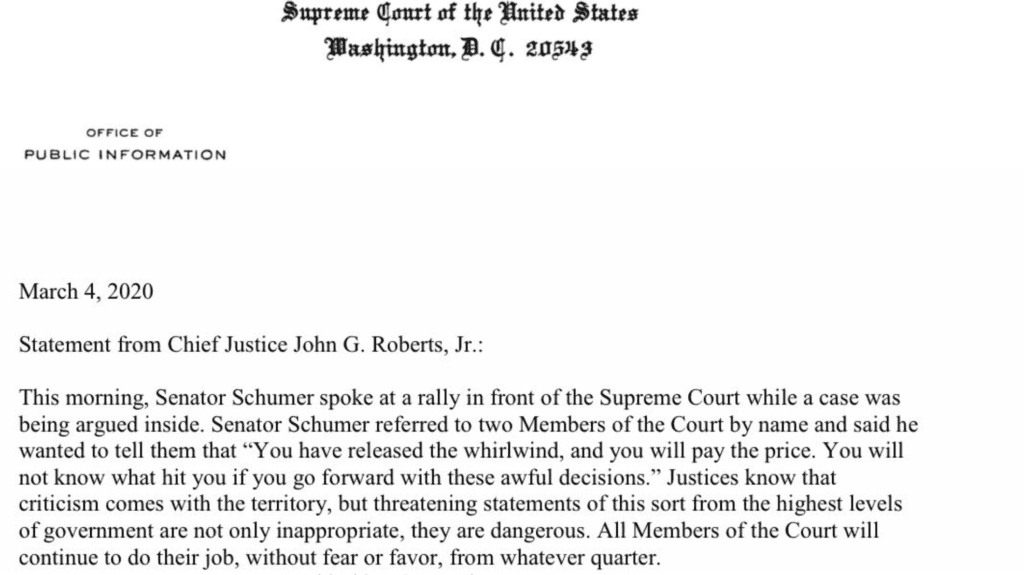 I’ve seen some on the right defend Schumer on this with more vigor than they defend fellow compatriots who are ridiculously judged under the rule Schumer excuses himself from now. Unless the left acknowledges their rules on rhetoric are maliciously one-sided and self-serving, I see no reason to make them easy in their hypocrisy.